I am currently taking part in a series of challenges: April Love and April Moon, along with Feast and my word for the year, nourish (which means to feed and to cherish). What I love about working with multiple sets of prompts is the magic of how they come together.

Today’s prompt for April Love was “shadows.” The prompt for April Moon was “That’s when I knew that this chapter of my life had ended. And now I was finally free to…” I kept thinking of the two of them together, how they were related, and it didn’t take much time to see the connection.

If you’ve been reading this blog for long, you know the story behind the Self-Compassion Saturday series. After struggling for over three years with serious fatigue which had stumped my primary care doctor, I decided to make an appointment with a functional medicine practitioner. Even though I told her that I was a disordered eater, even though at the time I’d been overexercising and restricting what I ate, she told me I was obese, and that I should go on a diet and get more exercise. 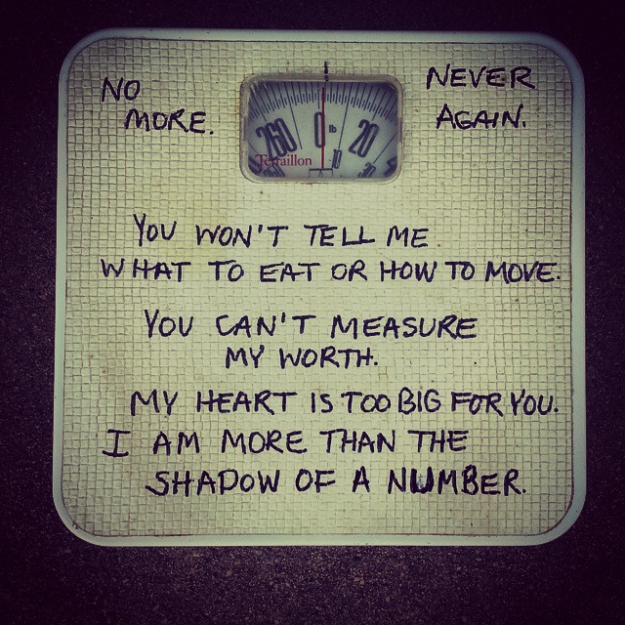 Over a year ago, I stopped weighing myself, dieting and overexercising. I started practicing intuitive eating (allowing my body to tell me when it was full, when it was hungry, what it wants and what it needs), and reading a lot about Health at Every Size. I started allowing myself to want what I want, to have what I want. I became a certified yoga instructor. I broke up with my trainer. I took Buddhist refuge vows. I no longer pushed and punished my body. I stopped smashing myself to bits. The fatigue is mostly gone.

April Moon started with an oracle reading. We got the first email and it told us to pick one of the cards — 1, 2, or 3. 3 was the clear choice for me, but when the next email came a few hours later with the results, the archetype you chose that would guide you through the challenge, I resisted at first. “Lover: passion, tenacity; creation, creativity; sensuality; joy; empathy; play; beauty; and tenderness.” I wanted to pick again. The other two archetypes were animals, one powerful and one graceful. I wanted one of those.

After I let it sink in for a minute, I realized it was exactly right. This past summer, Kat (one of the hosts of April Moon), sent me a letter that included a card she’d pulled for me, “Nectar of the Lotus,” the Divine Mother, a Bodhisattva. Kat told me to let her know if it resonated with me. I’ve kept her letter on my desk ever since, not ready to took at it, consider it, but when I saw the archetype I’d picked for April Moon, I knew it was time to take a closer look.

Card 20 from the Kuan Yin Oracle by Alana Fairchild

The Divine Mother wishes that those who are meant to feed others will be well fed too! Your devotion to helping others has the effect of squeezing the cosmic heart chakra of the Divine Mother. From her heart drips nectar, sweet, sustaining, life-affirming energy that feeds you and allows you to nourish many Souls. Like a sacred chalice that overflows, when you are full, well and vital, the feeding of others happens effortlessly. You are guided to be fed now, fed with Divine Nectar from the Heart of the Mother. ~Alana Fairchild

And with that, kind and gentle reader, I think I’m going to go take a nap.