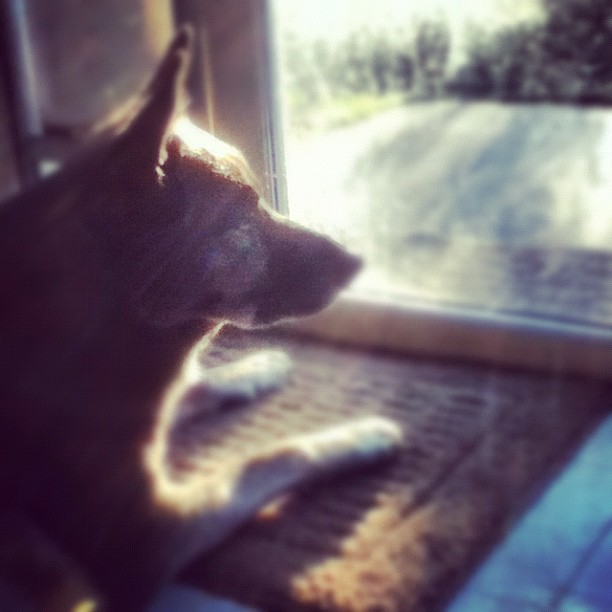 Confession: Even though I don’t talk about it as much as I did, I am still missing Dexter something awful. I was looking through my archive of journals this morning for something specific I wanted to write more about, stumbled across my entry from the day Dexter died, and maybe partly because Sam and Eric were gone on a walk and I was alone and knew no one would hear me or be upset by it, I started sobbing. It seems harder to “get over” this loss because I still wasn’t really over losing Obi or Kelly when “it” happened again. And to be quite honest, since I’m confessing, coming clean, in the past five or six years really awful stuff has happened, much of which I didn’t talk about here, either because it was someone else’s stuff or because the consequences of speaking out were too great. Add that to the fact I’m an introvert and Highly Sensitive Person who is easily overwhelmed and it’s a toxic mess.

Stress, suffering comes from resisting what is happening, when things aren’t going the way we wanted, and no matter how evolved we might be, how able we are to stay with, cope with the hard stuff, no one wants to see those they love suffer, get sick, or die. My delusion that I should be able to help, to fix it, and smashing myself to bits if I can’t, only adds more suffering.

Continuing in the spirit of confession, yesterday I ate an entire bag of Smart Puffs. They are all natural, gluten and trans fat free with no preservatives, and an entire bag is 630 calories, which is less than a Big Mac or a Peanut Buster Parfait, but still it was a deliberate binge. I was tired, frustrated that my energy wasn’t keeping up with everything I wanted to do, so I took a break to watch TV, a really good show from Mike Birbiglia, My Girlfriend’s Boyfriend. I finished off the tail end of a bag, less than 10 puffs, could have stopped right there, but made the decision to open a new bag. Multiple times I made the decision to keep going, keep eating, and eventually finished the whole bag.

(This video has been helping me to be gentle with myself when I eat something I think I shouldn’t, I remember his sweet little voice listing off everything he’d eaten, groan about how it was too much, and it makes me smile, have a sense of humor about it rather than beating myself up)

Underneath any binge is always the collection of all the other hard stuff I haven’t quite been able to deal with, all the bad stuff that’s happened, the things I’m sad or worried about, what’s been lost, the various times and ways I’ve abandoned or denied myself.

The bottom line, whether you weigh 340 pounds or 150 pounds, is that when you eat when you are not hungry, you are using food as a drug, grappling with boredom or illness or loss or grief or emptiness or loneliness or rejection. Food is only the middleman, the means to the end. Of altering your emotions. Of making yourself numb. Of creating a secondary problem when the original problem becomes too uncomfortable. Of dying slowly rather than coming to terms with your messy, magnificent, and very, very short—even at a hundred years—life. The means to these ends happens to be food, but it could be alcohol, it could be work, it could be sex, it could be cocaine. Surfing the Internet. Talking on the phone.

For a variety of reasons we don’t fully understand (genetics, temperament, environment), those of us who are compulsive eaters choose food. Not because of its taste. Not because of its texture or its color. We want quantity, volume, bulk. We need it—a lot of it—to go unconscious. To wipe out what’s going on. The unconsciousness is what’s important, not the food. ~Geneen Roth, Women Food and God. 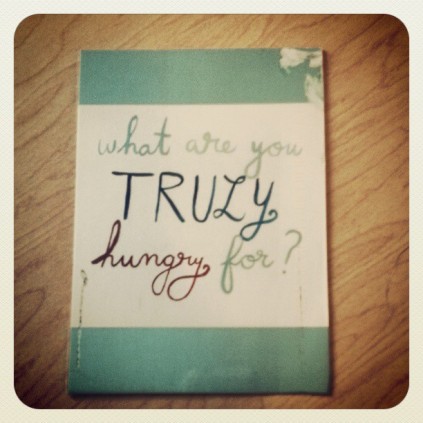 I am rereading Geneen Roth’s Women Food and God. You already know, if you’ve been reading, that I am working with a therapist who specializes in dis-ordered eating. I’m also starting a book group with the book Intuitive Eating led by Rachel Cole. I’m making an effort, but in other ways I am surrendering, letting go of effort, letting go of pushing and trying and forcing. I also am back to weighing the most I’ve ever weighed, after losing this same 20 pounds six years ago, having hired a trainer and started yoga and even running and going on yet another diet, starving myself down to what seemed acceptable. Slowly the weight came back — some due to more food less movement, some because of the shame I felt being called obese by someone who was supposed to be helping me, some of it because my body is changing and my metabolism and energy levels just aren’t what they were — but mostly because I wasn’t dealing with the underlying issues. 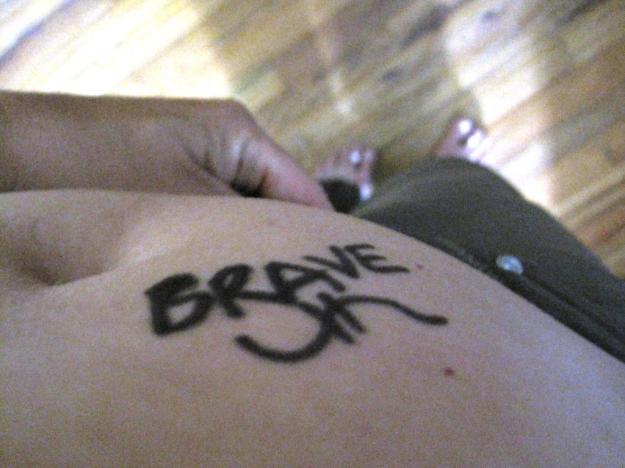 When you believe without knowing you believe that you are damaged at your core, you also believe that you need to hide that damage for anyone to love you. You walk around ashamed of being yourself. You try hard to make up for the way you look, walk, feel. Decisions are agonizing because if you, the person who makes the decision, is damaged, then how can you trust what you decide? You doubt your own impulses so you become masterful at looking outside yourself for comfort. You become an expert at finding experts and programs, at striving and trying hard and then harder to change yourself, but this process only reaffirms what you already believe about yourself — that your needs and choices cannot be trusted, and left to your own devices you are out of control. ~Geneen Roth

I don’t want to keep doing this, cycling through restriction and binging, punishment and control followed by rebellion, shame and smashing myself to bits. I’ve lost all sense of what my authentic body might be and I want to discover it, that point at which I am both happy and well, sane and healthy. I want to reach the point where I can stay open to what is happening, show up for what is exactly as I am, to feel the full weight of how sad I am, how much I have lost, allowing how much it’s going to hurt. And the one thing I know for sure — it’s not about the food. 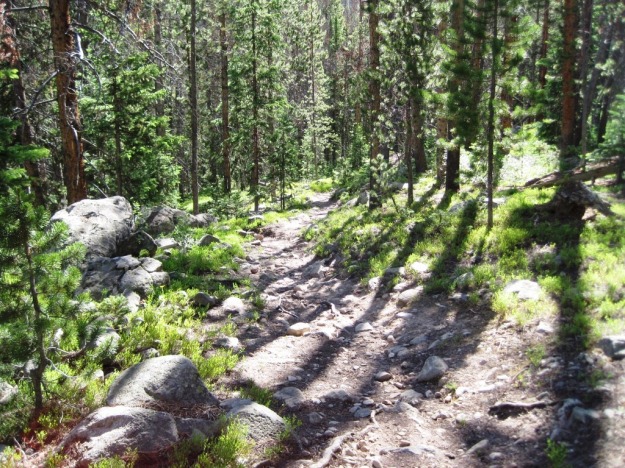 1. Good stuff from Kat McNally: August Moon 13 and The push and pull of grateful.

3. How to talk to someone who’s grieving on Salon.

4. Wisdom from a Facebook post written by Elizabeth Gilbert, “I’ll tell you one of the really good things about getting older: Slowly, you start to work out a comprehension of your own inherent madness.”

5. Enough is Enough by Diane Clement.

6. 15 Ways to Spread Kindness in Your World Today on The Positivity Blog. 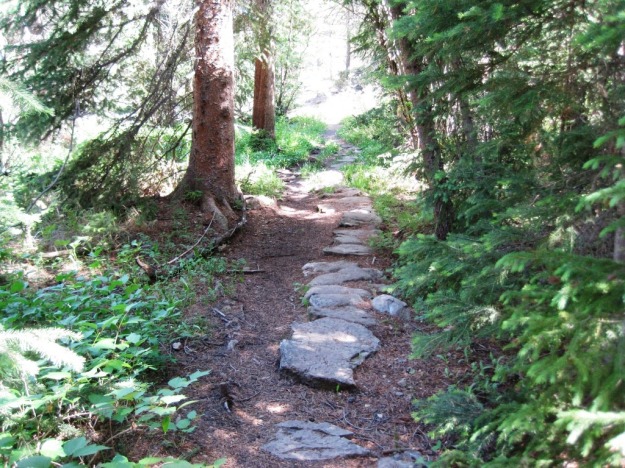 8. Not Knowing What to Say on Gluten Free Girl.

9. Need a totally profesh-sounding bio? Like, right now? A Mad Libs-style template for anyone, ever. from Alexandra Franzen.

10. I Believe An Introduction Is In Order. on Blog con Queso. There is almost nothing cuter than a boy and his dog, (unless it’s a girl and her dog). 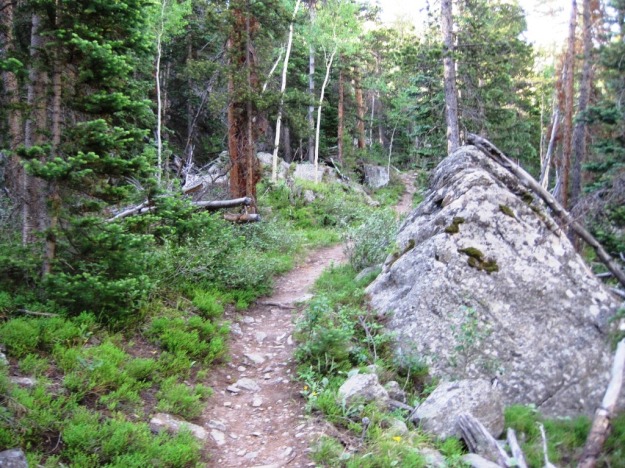 12. Wisdom from Kurt Vonnegut, shared by Elizabeth on the Squam blog,

The arts are not a way to make a living.
They are a very human way of making life more bearable.
Practicing an art, no matter how well or badly,
is a way to make your soul grow, for heaven’s sake.
Sing in the shower.
Dance to the radio. Tell stories.
Write a poem to a friend, even a lousy poem.
Do it as well as you possibly can.
You will get an enormous reward.
You will have created something.

13. 20 Hilarious Cooking Fails That Will Make You Feel Like an Iron Chef on Bored Panda.

14. 21 Tips to Keep Your Shit Together When You’re Depressed. I might have posted this before, but it is worth repeating.

15. C.O.G. – Official Trailer, this autobiographical comedy is the first-ever screen adaptation of the work of acclaimed writer David Sedaris and I can’t wait to see it.

16. How To Make Anyone (And Everyone) Want You on Mind Body Green.

17. The Most Honest And Heartbreaking Reason To Leave Your Front Door Unlocked I’ve Ever Heard on Upworthy.

20. Voice Notes: Laura Simms, an interview with one of my favorite women on The Voice Bureau. I hadn’t realized that both Laura and I are INFJ, (there aren’t that many of us, only about 1% of the population).

24. 5 Keys to An Engaging Online Course on the Ruzuku blog.

25. 20 Historic Black and White Photos Colorized and The 50 Most Perfectly Timed Photos Ever from Twisted Sifter.

27. 17 Problems Only Book Lovers Will Understand on BuzzFeed.

We need you here NOW, as you are, which is almost certainly GOOD ENOUGH. Speak now. Act now. Try now. Raise your voice now. Throw your ideas into the ring now. Show somebody your work now. Ask for the promotion now. Present your questions and doubts and suggestions now.

31. Fear Project, from artist Julie M. Elman, “I illustrate people’s fears. Working with their words, I just try to visualize what those fears could possibly look like. I work quickly and post my pieces no matter how I feel about them. It’s a good way to get over any fears I have about the creative process.” Thanks to Jeff Oaks for sharing the link.

32. Wisdom from Seth Godin, “The Dummies mindset, the get-rich-quick long sales letters, the mechanistic, industrial processes aren’t on offer because they’re the best we can handle. No, they sell because they promise to reduce our fear.” 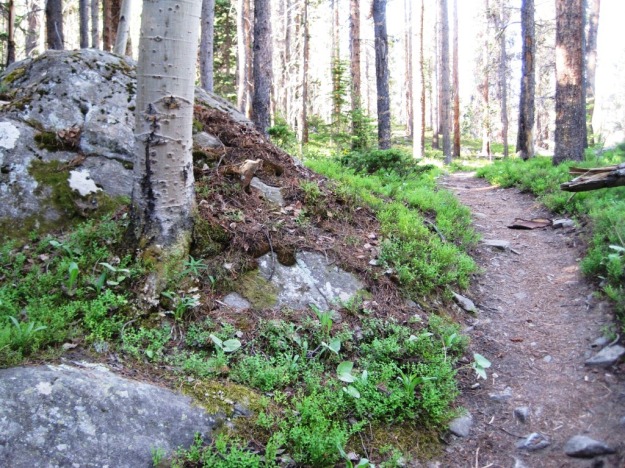 Every day the sun comes up and every day the sun goes down. Every day we have an entire day to do the best we can do, and then we get to go to bed and be done with it. When we wake up every morning, we have the chance to start over with a sparkling brand new day. No blemishes, no stains, nothing . . . a brand new beautiful perfect day to make into whatever we choose. If we stumble and have a less than desirable day, or if we make mistakes, if we do things we are not proud of . . .

Let each day go and be done with it. TODAY is your day. TODAY is THE day, the very most important day of your life right now. Let yesterday go and start over fresh.

34. 32 Books That Will Actually Change Your Life, according to BuzzFeed. 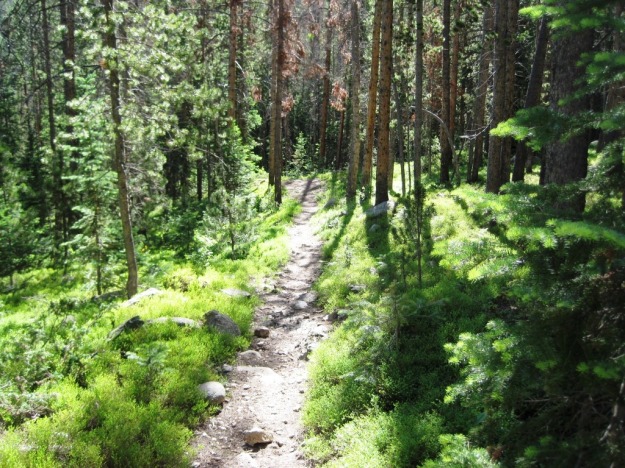 Sometimes we don’t act because our souls know it’s not the right time or right thing. It’s not that we’re lazy. It’s that we’re fiercely guided. Fear tries to push us. Love will wait until we’re ready — because only our readiness makes it the right time.

39. The Making of a 21st-Century Illuminated Manuscript: Inside Debbie Millman’s Creative Process on Brain Pickings.

40. From Susannah Conway’s Something for the Weekend list, Chickpea Pesto Sandwich Recipe from Thug Kitchen.

41. Quite possibly the best video ever, OWN Original Shorts: Dogs/Meditation. The only problem with this video is that it’s not long enough.