Walking across campus, coming back from a meeting, I hear what sounds like owl noises in the trees at a spot known as Sherwood Forest. Five years ago, two graduate students were struck by lightning in that same spot, one killed instantly and the other dying a week later. When I did a ride-along with the CSU Campus Police, they told me a high number of sexual assaults have occurred over the years in that grove. Typically, I avoid it, but the noise and the chance to maybe see an owl draw me in.

At first, I think it might be a student making the noises to mess with people walking past, but I see another girl stop and look too, so I go further in. I locate the source of the noise high in a pine tree. A large owl, like the pair I see in the morning sometimes at Lee Martinez park, raises its head and shakes. It spreads its wings, flying to another tree. I move to find it again and hear someone call to me, “If you want to see both owls, come over this way.” 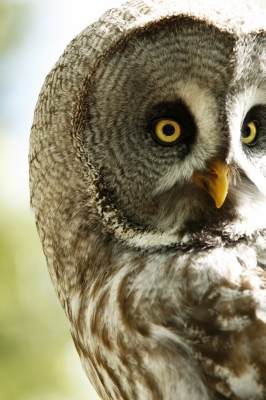 A Natural Resources student watches too, tells me his professor has been studying this pair for years, that they come back to this same place annually to mate and raise their babies. Once their family leaves, Sherwood Forest is quiet for a few weeks, until the Red-Tailed Hawks come to use the same nests to have their own families. He says if you are ever near this area and hear the Magpies squawking and see them diving at something, you know the owls are around. Apparently, at night, the owls try to steal Magpie babies for their dinner, so the next day, when the owls are typically trying to rest, the Magpies seek revenge.

We stand there for long minutes, looking up at the tree top and the owls. The sounds of a busy campus are muffled by the trees. Finally, when the owls quiet down, I tell the student “Thanks for owling with me,” and leave, happy to know there is another pair of owls I can visit so close.

Owls symbolize wisdom, intelligence, and freedom. They are seen as oracles of secret wisdom and protectors of the dead, of souls and secrets and dreams. They are able to see things that are hidden, are shape shifters. They have a connection to the underworld, death, and the moon. If this blog had a mascot, an animal spirit guide, I imagine it would be an owl, most likely riding on the back of a dog.