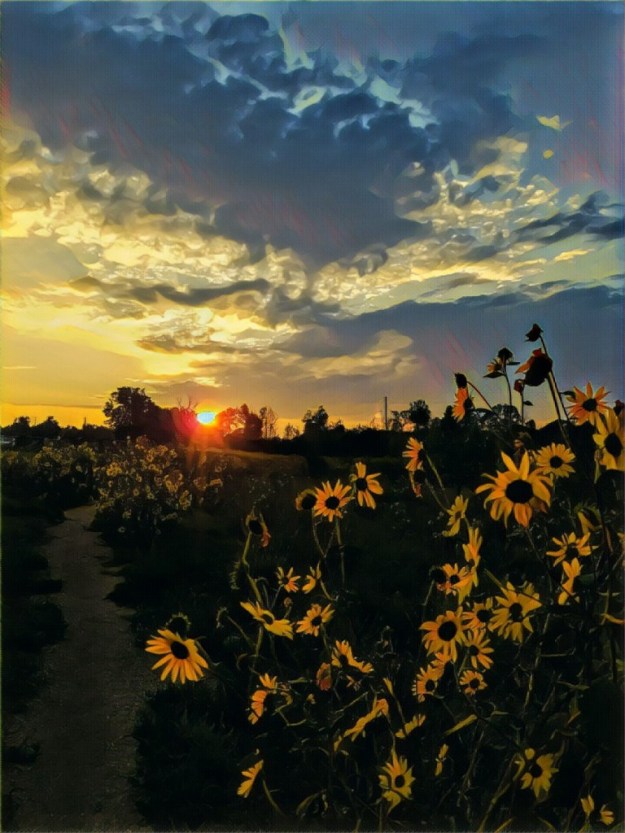 Image by Eric (and Prisma) from our morning walk

2. The Hummingbird Whisperer: A UCLA Researcher Cultivates a Community of 200 Hummingbirds Outside Her Window.

3. A Pop Quiz for White Women Who Think Black Women Should Be Nicer to Them in Conversations about Race. In related news, 10 things every white teacher should know when talking about race, and White People — We Can’t Dismantle Trump And Racism Without You, and The Subtle Linguistics of Polite White Supremacy, and The First White President, (this is long, but so worth the read or listen).

4. Corona del Mar teen selected as one of the nation’s top 5 young poets.

5. We need to put an end to fatphobia in woke spaces from Melissa Toler.

6. Flying Spatulas and Holy Donuts from Jena Schwartz, because this:

And such is the reality of our world. All of the simultaneity — the very thing I felt like “my” movie was about when I was young, rushing up like high tide. Life is a crushing collision of epic normalcy and nuance and tragedy and love stories and teenagers and crickets and donuts and heroes. We are all bad guys and good guys at one time or another, and if we dare to be creative, maybe, just maybe, what we find interesting and worthy of our attention will catch the light for someone else, too. Will alter their way of seeing or being. The thing is, we often never know — and must keep going (living, creating, loving, writing, being, working, learning, giving) on faith.

7. Photographer Finds Locations Of 1960s Postcards To See How They Look Today, And The Difference Is Unbelievable.

8. Woman Witnessed Teen Tossing Firecrackers Into Gorge: “There Was a Whole Group of Kids Who Found It Funny To Do This.”

12. LANGHORNE SLIM – “Never Break”, a song he wrote the day after the election.

13. What It’s Like to Be Trapped by a Category 5 Hurricane on The New York Times.

14. Why forests and rivers are the most potent health tonic around.

15. Truth in Jest? “Louis C.K. would rather ignore those assault rumours, but at this point, he can’t just let his art do the talking.”

17. Depression is a physical illness which could be treated with anti-inflammatory drugs, scientists suggest.

23. 8 Podcasts Hosted by WOC to Make Your Commute Breeze By.

24. A Poem so that the Weight of this Country does not Crush You by Yosimar Reyes.

26. That Moment You Realize You’re Gay. This story is so beautiful.

27. Wisdom from Seth Godin: Common traps, worth avoiding and Toward cooperation.

30. Google’s most-searched “how-to” questions capture all the magic and struggle of being human.