1. The end of August. Now that I’m back at work, I’m okay with summer being over, with things cooling down. The end of any month also means a pay day. This month was sometimes too hard, too much, but there were also moments where I sat in the backyard with the dogs, the grass under my feet, listening to the kids playing in the street and drinking a cool glass of clean water.

2. Good friends getting married. I’m officiating the wedding. It’s superficial, but I’m also so grateful I was able to find something to wear that I feel okay about.

3. An insulated house. For 15 years, our house had no insulation in the exterior walls. They just didn’t build them with it in the early 60s in Colorado. It cost big money and took a lot of effort on our part (which still isn’t over) and was a bit of a mess, but it’s done now. So far we’ve noticed that the house retains its temperature (rather than adjusting to what’s outside) and it’s quieter inside. That plus cheaper electric and gas bills will make it all worth it.

4. A three or four day weekend. I took today to get some stuff done for the wedding, and because I’d worked both really early and really late other days this week. The wedding is tomorrow and the other two days I have left away from work, I’m going to be as lazy as I can.

5. Ringo and Sam. They are settling in to being back home, are getting along so much better than they were that one horrible week at the beach. A few days ago, they were out eating stuffed frozen Kongs together, and today when I got home and let them out, they played and played. 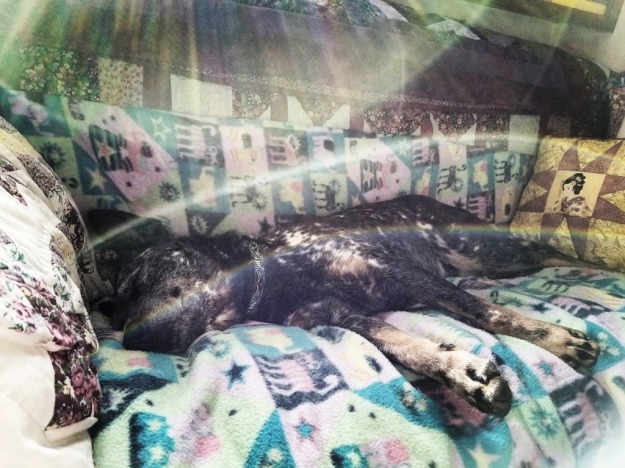 Bonus joy: Ringo asleep on my feet as I write this, finding shoes to wear with my dress the first place I looked, painted toenails, my new car, hiring two new interns, my new therapist, being able to talk to Eric about things that are really hard, a new book, a new deck of tarot cards, two days ahead where I won’t have to do anything, some good tv and movies on their way, meditating, sleeping in, clean sheets, soaking in the tub, lunch plans with good friends.