We just got back from spending three nights at a cabin up at Crystal Lakes. After losing Dexter, we needed to get away to the green and the quiet, spend some time just the three of us, hit the reset button.

The cabin is called Lofty Lookout, and it has a gate at the end of a long driveway lush with aspens and wildflowers that hides the house from the main road (when Eric saw that, he said “I approve”), and is four floors high (basement, main floor, sleeping loft, and another sleeping loft). It was way too big for the three of us, but we rented it because of the location and the decks.

The view was amazing, there were hummingbirds at the feeder all day, and we could walk out the front door and land directly on a five mile hiking trail that wound through pine trees, aspen groves, and meadows. At the sight of one spot along the trail, filled with aspens and wildflowers, Eric said “you almost expect a unicorn to come walking out of there.” 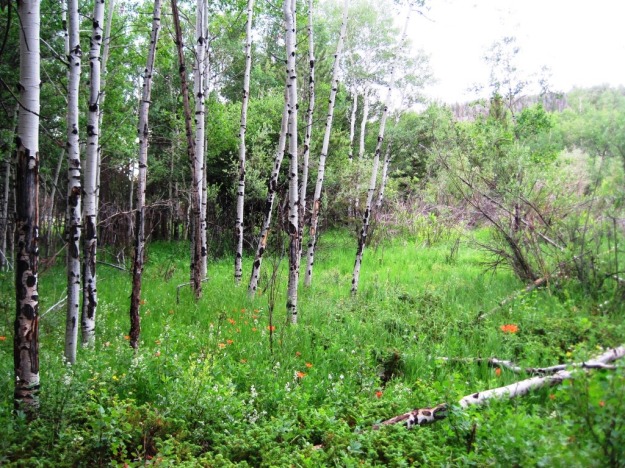 We hiked every morning, took naps every afternoon. I watched some HGTV and one day read an entire book, Neil Gaiman’s latest, The Ocean at the End of the Lane. It was a wonderful book, but I’m biased because I love everything he writes — graphic novels, adult fiction, children’s books, essays, blog posts. One of my favorite parts of the book was this,

I have dreamed of that song, of the strange words to that simple rhyme-song, and on several occasions I have understood what she was saying, in my dreams. In those dreams I spoke the language too, the first language, and I had dominion over the nature of all that was real. In my dream, it was the tongue of what is, and anything spoken in it becomes real, because nothing said in that language can be a lie. It is the most basic building brick of everything. In my dreams I have used that language to heal the sick and to fly; once I dreamed I kept a perfect little bed-and-breakfast by the seaside, and to everyone who came to stay with me I would say, in that tongue, “Be whole,” and they would become whole, not be broken people, not any longer, because I had spoken the language of shaping. 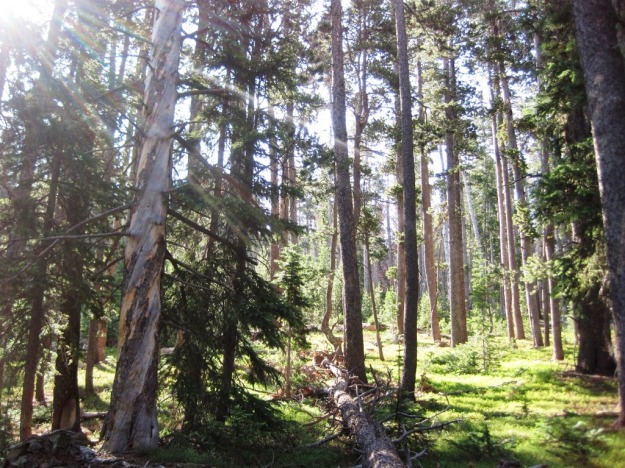 The land, the trails and the trees and the sky here in Colorado are magical. The time spent there was medicine, and yet I wasn’t without suffering, wasn’t beyond generating my own suffering. As a part guard, part herd breed, Sam takes a while to settle in anywhere new, is nervous and worried. I felt bad at first for forcing him along, even though I know that doing new things is good for him, that challenging him a little helps him to become a more confident dog. He panted and whined that first night, checked on every new noise and sound. Then on the second day, just as he was calming down, he got a spider bite on his belly and I worried about that.

The first night, I slept terrible, between Sam’s whining every time we moved and us choosing apparently the most uncomfortable bed in the whole cabin. Then there was the night we were boiling water to cook some corn on the cob and something that had been spilled on the burner drip pan caught on fire. And that night when we moved to a different, more comfortable bed, I had to move the carbon monoxide detector (the little green light would have kept me awake), and unplugging it set it off and I couldn’t figure out right away how to stop it. 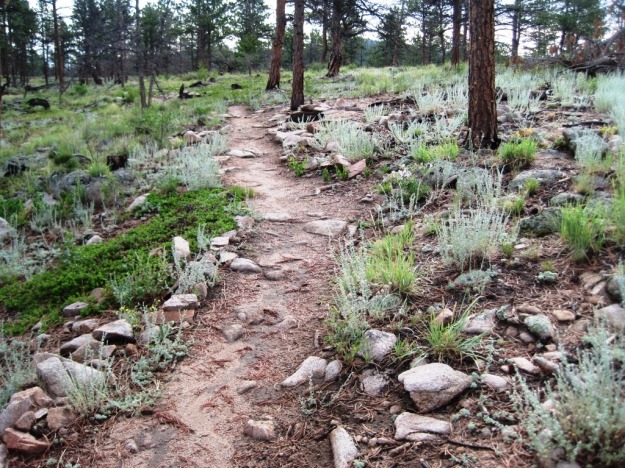 Then on our hike the final morning there, our car alarm got triggered while it was parked at the trailhead, and malfunctioned so that it keep going off, stopping and starting for who knows how long, and someone left a nasty note on our car window (saying things like “rude” and “extremely annoying”), as if anyone would do such a thing on purpose. So even as I tried to relax, to heal, I continued to generate my own suffering. I can’t escape myself, no matter where I go, no matter how far I hike. 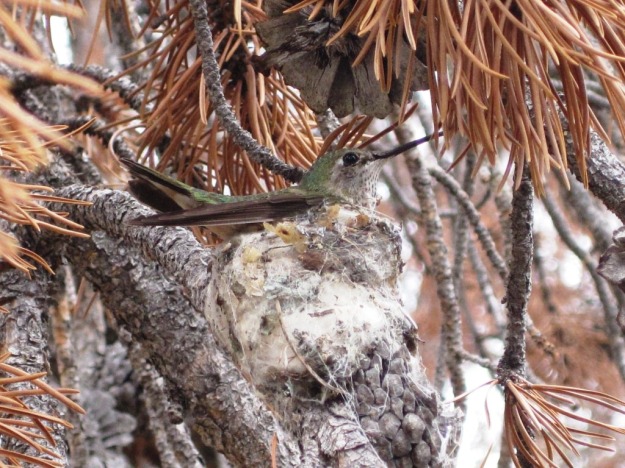 On our last afternoon, we saw a hummingbird sitting on its nest. When they are making their nest, they gather up anything soft they can find and they bind it all together with spiderwebs. They do this so that the nest will stretch as the babies get bigger. I was comforted seeing this, because earlier in the day, a war had begun around the hummingbird feeder on the cabin’s main deck. We’d been enjoying it so much, how we could sit right next to it but they would come feed anyway, letting us watch. But at some point, things turned sour and they began fighting over it, guarding the feeder by chasing and attacking each other, even though there was so much food available there was no way they could ever eat it all. We are like that too, I thought as I watched them, so convinced that there’s not enough, that the only way to get what we want, what we need is to fight for it.

Every time I feel anxious or sad, irritated or uncomfortable, I try to remember what Pema Chödrön teaches about working with groundlessness,

It’s not impermanence per se, or even knowing we’re going to die, that is the cause of our suffering, the Buddha taught. Rather, it’s our resistance to the fundamental uncertainty of our situation. Our discomfort arises from all of our efforts to put ground under our feet, to realize our dream of constant okayness. When we resist change, it’s called suffering. But when we can completely let go and not struggle against it, when we can embrace the groundlessness of our situation and relax into its dynamic quality, that’s called enlightenment, or awakening to our true nature, to our fundamental goodness. Another word for that is freedom—freedom from struggling against the fundamental ambiguity of being human. 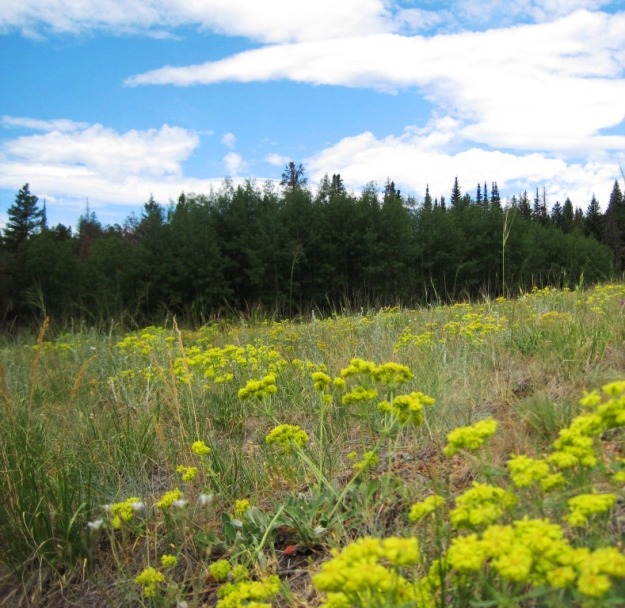 We cause so much unnecessary suffering for ourselves and each other, can be so confused, allow ourselves to get caught up in the anxiety of “not enough.” I am trying to be gentle, to forgive myself for that. Every moment I try and keep my heart open, to soften and surrender to what is, to notice the magic happening around me, to generate compassion and ease suffering. Some moments I am more successful than others, but I keep showing up, keep trying.