Even during this timeless time, Sundays maintain a particular quality. They are still a reminder to rest, to slow down, to recover — which is important, no matter what day(s) you choose to honor it. And yet people, including me, are struggling right now to find the balance between effort and ease. Some feel frozen, fatigued, stuck. Others can’t stop moving, struggle with the need to “stay in place,” feel agitated by the isolation, the restrictions. My husband, in high demand right now because of his experience with online learning, worked close to 60 days without taking a full day off.

As a contemplative practice guide, this time has both limited and expanded my opportunities. I can’t teach in person right now and don’t know when I’ll be able to again, yet still long to offer something to ease suffering. I knew I could offer practices online, could record things and share them, but I’d never done that before, didn’t even know where to start.

Then one of my students from the weekly yoga class I was teaching “before” called with a request. She told me how much everyone was missing me, and asked was there a way we could put something together for them, so they could practice with me again? I had already been considering it, and told her I’d put something together.

It took longer than you might expect, as everything seems to with me. First I had to sit with my resistance. I was grieving my opportunity to teach in person. I am used to putting my body in front of a room full of people, having them watch me move, watch me sometimes struggle to move. Old me, with all of my body issues, still lingers, sometimes cranking up the judgment, even spiraling into shame, but I overcome that, am buoyed by the connection with other humans, comforted by their effort and openness, and I know that when I teach, it’s not about me. Teaching on video felt like it would put the focus back on me, my body and voice, the way I move and what I say, centering me, isolating me in a way I thought would feel lonely, weird, uncomfortable. I needed to work through that.

I decided the only way forward was to lower the bar. I’d start with a seated meditation practice first, then a seated asana practice before I did a full Hatha asana practice. I also kept in mind this was not a project or a product, and it didn’t have to be perfect. I’d been thinking about creating some teaching videos before, so people who weren’t geographically close could practice with me, and this seemed like a low stakes way of trying that. Also, who knows how long “this” will last, and, not to be morbid, but there’s no guarantee that I’ll be one of the ones to survive it, so this could also be something to leave for those who love me and might miss me later.

The next step was to find a place where I could film. This is harder than it may seem. Our house is only 1080 square feet, not “open concept,” so finding a space big enough to fit my mat and for me to move around but also where I could place a recording device far enough away that I could be seen standing or lying down wasn’t easy. And, Eric is working from home right now and is home most of the time. I did a “location scout” and there were two places where I could teach asana, one other I could use to teach meditation. This meant some clean up and rearranging of furniture and negotiating with Eric’s work schedule, but ultimately workable. 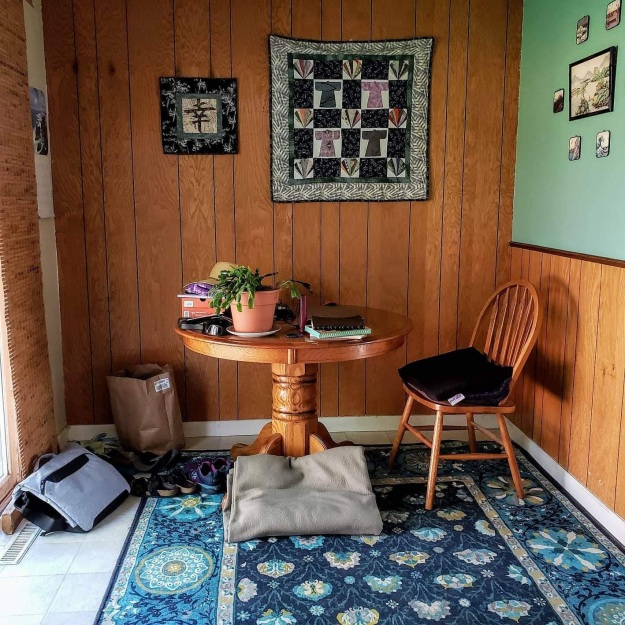 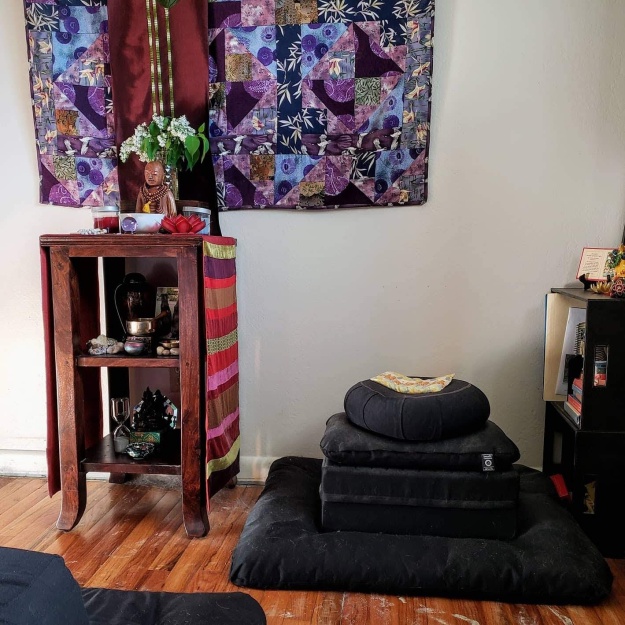 I spent a day cleaning up my practice space (so much dog hair and dust!), putting clean sheets on our futon and moving my yoga stuff into the garage, cleaning up the last bit of junk in the garage and putting a load of stuff to take to ARC in the car. I cleaned it up to use as a place to film meditation practices, but also just in case one of us gets sick and needs to quarantine ourselves. At first, Eric said that was dumb cause we’d probably both get sick at the same time so what’s the point, but I told him even if we could stagger it by a few days, so only one of us would be in the worst of it at a time, it would be better. I bought a humidifier, a pulse oximeter, acetaminophen, tissues with lotion, cough suppressant, chicken noodle soup, frozen orange juice, and Gatorade. Next I need to get a few folks to agree to take care of our dogs if we can’t and put together a file with our living wills and information so Eric could pay our bills and instructions about the dogs. I’ve been putting this sort of prep off because even though it will mean I’m ready, I’m so NOT ready, and I don’t think I’ll ever be ready.

Finally the day came when I was ready to try and record something. It took some time to figure out the best camera to use and the placement that would allow the best view. I still had no idea when I started recording if I could do a longer video on my phone and if I could do it without a secondary microphone. I was nervous, did one short test video before recording the real thing. I was totally sweating (an unfortunate side effect of the Zoloft), they were working on a gas line right in front of our house, and Eric was waiting until I finished to take a shower because our main bathroom is right across the hall from my practice space. Even with all that distraction, I recorded the video in one take. Any time I felt distracted, unsure of what came next, I simply paused and took a breath. I fairly quickly and easily settled into “teaching mode,” imagined my regular students watching, there with me, and I felt okay about it, was satisfied with how it turned out.

Here it is, kind and gentle reader. “A short practice (including a body scan, calming breath exercises, a heart-centered loving-kindness mediation for ourselves and as an offering to others, ending with ‘breath of joy’) to cultivate a sense of well-being (safety, ease, comfort, joy, etc.) to counter the unpredictable and stressful nature of current times.”

I had planned on waiting another week to do another video. But then Eric decided to take Ringo hiking yesterday, so I knew I’d have the house all to myself, that Sam would spend the time quietly sleeping on the couch, and if I was going to do another video, it would be a good time. I already had an idea for a seated asana practice with meditation, so I set up in the dining room and stared to record. Again, I was super sweaty, like one long hot flash, and I felt more awkward than during the first video. At one point, during the meditation, I mistakenly thought the recording had stopped, got up to check my phone only to see it was still recording, so there was about 30 seconds I’d need to edit out before posting, and for some reason the camera kept blurring and refocusing so the visual quality overall isn’t the best. It also turns out I didn’t have enough memory on my phone for the full 40 minute video, so I was going to have to splice two videos together. After a day filled with frustrating tech issues where I learned a lot about what not to do next time, I finally posted a finished video.

Besides technical issues, I had some more personal issues with this video. Old body shaming voices came up as I watched what I’d recorded, the ones who five years ago would have convinced me I should never share the video because I was too disgusting to look at, that people were going to judge me. The judgment came up but it didn’t lead to a shame spiral, I didn’t smash myself to bits because of it. I didn’t act on that feeling, didn’t make a plan to change my body, didn’t accept that there was anything wrong with me or that my body needed to be a project.

Here’s that one. “Practicing staying open to what arises, even when it’s difficult. A shorter, seated asana practice that can be done sitting in a chair or on the floor, followed by a short meditation.”

I still have a lot to learn, especially about how to make something of quality but with ease. People who do this more professionally have all the equipment to “do it right” but I just want it to be simple. I hope I never have the need to monetize my teaching in this particular way, that I can just give it away for free or not do it at all. It might be a mess but it’s true, take it or leave it. May it be of benefit, may it ease someone’s suffering — at the end of the world, in the middle of nowhere.