Instructions for living a life:
Pay attention.
Be astonished.
Tell about it.
~Mary Oliver

This morning, walking the dogs with Eric, I saw: a huge tree that’s been dead for a long time finally fell down (and it was big enough that it certainly went “boom” when it did), a dead beaver carcass, two white tailed deer, one whose tail wasn’t quite working so it might be hurt, one massive turtle still looking for a spot to lay her eggs walking like a tiny dinosaur through the grass by the creek between Wood Duck Pond and the McMurray Ponds (same exact date we saw her last year, so May 31st is now officially Turtle Day), two mini Herons, one of which looked more like a Penguin as he stood on a log fishing (turns out they are actually called a Black Crowned Night Heron), one large Blue Heron in flight over the river that later was heard squawking and flying in the other direction, and finally, a bicycle parade.

I received gifts: access to workshops with amazing women at the World Domination Summit in July (yoga with Marianne Elliott, Writing with Susannah Conway, Book Content Mapping with Cynthia Morris, and Identifying Superpowers with Andrea Scher…holy wow, such amazing women that I so adore, my head/heart might explode), my Kickstarter reward from Danielle Ate the Sandwich arrived, along with her new album, which is every bit as good as I knew it would be, and I found a heart-shaped rock on our walk.

I gave gifts: some were shared words of wisdom and kindness, others were scholarships for Susan Piver’s Open Heart Project Practitioner level, and finally there was my heART exchange project, which I finally finished and mailed to Australia today. I plan to write a post about the process (I didn’t just make something, I learned stuff) once my swap partner receives it. 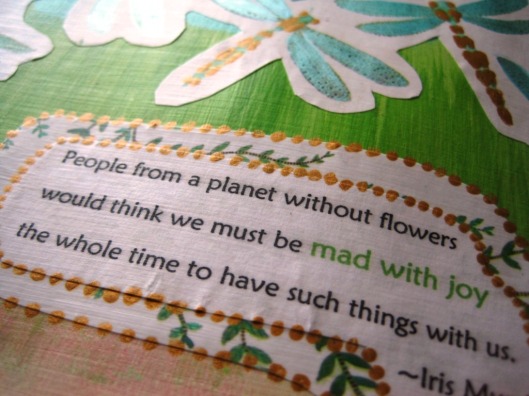 Tribe: it’s Tribe week in my Unravelling ecourse with Susannah Conway, so I’ve been thinking a lot about that, how we can be a tribe of one even. I spent a little bit of time being a tribe of one, writing and eating lunch while waiting for a friend to arrive so we could be a tribe of two and have a long talk about perfection, art, boundaries, dogs and trust. Then, I spent part of the afternoon having another long talk with another good friend, drinking mango lemonade and eating a blue flower cookie as big as my head. I have amazing women in my life, in my tribe.

I’ve had moments of being wholehearted, with myself and others in my tribe. These two quotes from Anne Lamott remind me how wonderful and difficult that is: “The love and good and the wild and the peace and creation that are you will reveal themselves, but it is harder when they have to catch up to you in roadrunner mode” and “We begin to find and become ourselves when we notice how we are already found, already truly, entirely, wildly, messily, marvelously who we were born to be.” I am reminded to slow down, stop doing so much and be.

14 thoughts on “Instructions for Living a Life”