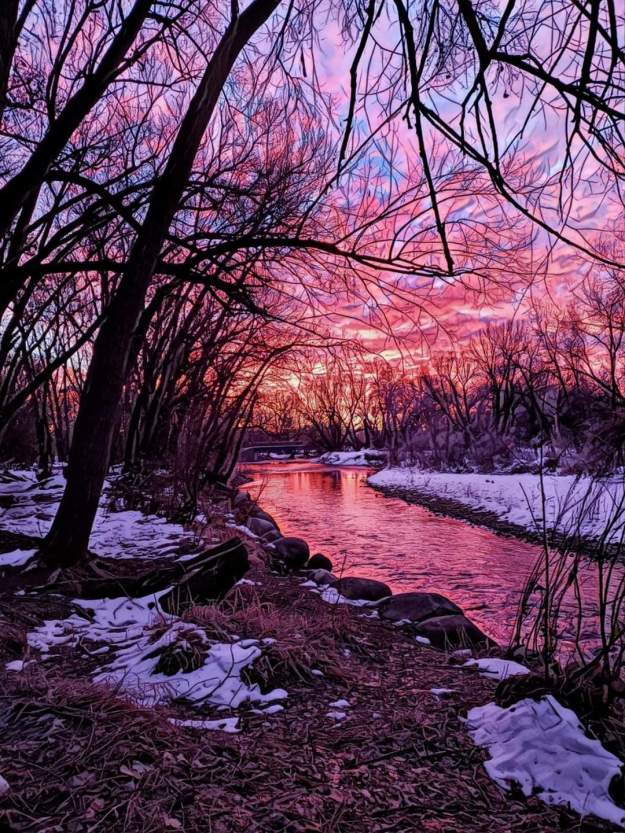 Sunrise over the river, image by Eric

1. 4 Things We Learned About Stress Relief in 2019 to Take Into the New Year.

2. The Mindful Kitchen: Recipes and Inspiration to Savor Each Moment and Every Bite, a Lion’s Roar special edition.

3. Ethical Conduct Is the Essence of Dharma Practice from Lion’s Roar. “The Dalai Lama and Thubten Chodron outline three levels of Buddhist ethical codes, how we can follow them, and what it looks like when we miss the mark.”

4. Awakening Fueled by Rage from Lion’s Roar. “As a dharma teacher, says Zenju Earthlyn Manuel, she’s told she shouldn’t feel or express rage. She disagrees and reveals how rage can be ‘life-giving and illuminating’ and help ‘fuel a transformation toward awakening.'”

5. Lydia Davis: Ten of My Recommendations for Good Writing Habits. “Advice for Writers on Editing, Revising, and Taking Notes.”

7. Dealing with Family and Friend Body-Shaming. Also from Dances with Fat, TikTok Thinks That Fatphobia Can Be Solved With More Fatphobia.

9. Why We Need Satisfaction to Feel Healthy Around Food. “When you don’t take into account our needs for pleasure and satisfaction in eating, it’s actually a form of deprivation. And we all know what happens when we tell ourselves that we can’t have something.”

10. Lost dog surprises her boy at school and his reaction is priceless. I’m not crying, you’re crying! *sob*

11. Colorado Business Owner Learns How Real Boycotts Are After His Kaepernick Boycott Forces Him To Close Shop. “Perhaps there are more…Colin Kaepernick supporters out there than I realized,” the businessman said. Maybe we don’t just support Colin Kaepernick, but we agree with his protest: “I am not going to stand up to show pride in a flag for a country that oppresses black people and people of color. To me, this is bigger than football and it would be selfish on my part to look the other way. There are bodies in the street and people getting paid leave and getting away with murder.”

12. Kindergartner Invites His Entire Class to His Adoption Hearing on The New York Times. “Nearly two dozen kindergartners gave testimonials in a Michigan courtroom about how much they loved the soon-to-be-adopted boy.”

13. Maybe it’s time to consider that Peloton is trolling us all with its advertising. In related news, Ryan Reynolds Perfectly Trolls the Peloton Holiday Commercial in His New Aviation Gin Ad.

14. ‘I Got Tired of Hunting Black and Hispanic People’ on The New York Times. “Multiple police officers in Brooklyn say they were told by a commander that white and Asian people should be left alone.”

15. George Zimmerman SUES Trayvon Martin’s family and Florida prosecutors for $100MILLION, claiming they engineered false evidence in his homicide trial for shooting dead the unarmed black teen in 2012. “The family’s attorney, Ben Crump, is also named as a defendant. He is accused of defamation and attempting to ‘deprive Zimmerman of his constitutional and other legal rights’. Crump responded to the lawsuit on behalf of himself and Martin’s parents in a statement Wednesday. ‘This plaintiff continues to display a callous disregard for everyone but himself, revictimizing individuals whose lives were shattered by his own misguided actions,’ he said. ‘He would have us believe that he is the innocent victim of a deep conspiracy, despite the complete lack of any credible evidence to support his outlandish claims. This tale defies all logic, and it’s time to close the door on these baseless imaginings.'” In related news, Trayvon Martin’s Family Responds to George Zimmerman’s $100 Million Lawsuit.

16. Homeowner Leaves Snacks For Amazon Delivery Guy And His Reaction Is Too Pure. His happy dance at the end of the video is one of my favorite things right now.

17. Migrant Teen Lay for Hours in His Cell Before He Was Found Dead on The New York Times. “A video shows the boy in severe distress. He was discovered by his cellmate, not immigration officials, as they originally claimed.”

19. How cuts to food stamp program could increase ‘poor outcomes’ for the food insecure.

20. “No Choice But To Act”—Pelosi Calls For Articles Of Impeachment Against Donald Trump.

22. #ExpressiveWriting Prompts to Use If You’ve Been Accused of #WhiteFragility #SpiritualBypass or #WhitePrivilege. I’ve shared this before, but it’s always worth a reshare.

27. Border Patrol threw away migrants’ belongings. A janitor saved and photographed them.

29. How To Leave Toxic Diet Culture Behind And Pursue Actual Health with Ragen Chastain. (podcast)

30. Body Kindness Podcast. “I believe we all have an enormous power to change diet culture – one voice at a time. In this podcast I talk to people from all walks of life about their journey to a better wellbeing. From food to family to sex, you never know what will come up in an episode.”

31. Toward an Applicable Theory of Just Not. “The power that so many of us have to change the deeply fucked systems we’re part of by abstaining from them — a more active and dangerous prospect than the language makes it sound — is immense, and it is terrifying. It is harder to do than is possible to explicate here; it is the most honest work there is.”

32. Lovers in Auschwitz, Reunited 72 Years Later. He Had One Question. on The New York Times. “Was she the reason he was alive today?”

33. My So-Karen Life on The New York Times. “I know Karens are hard. As a member of Gen X, I grew up surrounded by them.”

34. Instagram is broken. It also broke us. “Influencers and regular users are reckoning with what Instagram has done to them. Now Instagram wants us to love it again.”

35. Why White-Collar Workers Spend All Day at the Office. “The web may be our garden of boundless leisure, but it is also a global workplace without limits. And in the open office of the internet, more Americans are not only engaged in overwork but also convinced that it is necessary to love their labor, above all else.”

36. The False Promise of Morning Routines. “Why everyone’s mornings seem more productive than yours.”

37. Home For Christmas | Official Trailer | Netflix. (video) I finished watching this last night, and except for a bit of a letdown in the final moments, it was SO good. It reminded me a bit of Rita and Hjørdis, which you can also stream on Netflix and were also SO good.

38. Writing doesn’t always have to be exciting. Ordinary is good too. fro Melissa Toler.

39. When I Discovered My Town Is Where Immigrant Families Are Separated. “A Texas journalist’s investigation revealed the worst and best of America—including the Angry Tías from the community who are providing help.”