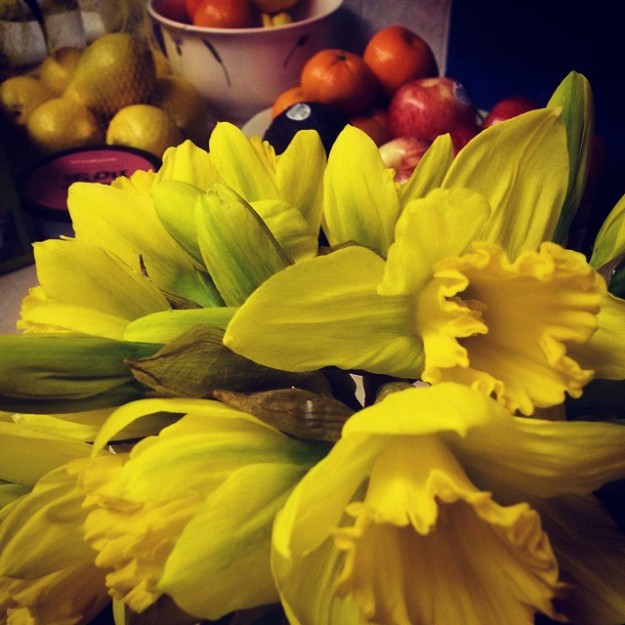 1. Spring. Bird song in the morning, crocuses blooming, 2 for $5 bundles of daffodils at the grocery store, driving with the windows rolled down, sitting on the back step in the sun while the dogs lounge on the patio.

2. Spring Break. Yes, I could have included this as an item in my list of all things Spring, but it deserves its own listing all by itself — it’s that good. And today is the best, the Friday before Spring Break. I feel giddy and so hopeful that the time mostly away from work will allow the space for some rest and ease.

3. My boys, sweet Sam and Ringo Blue. Have I told you lately how much I love my dogs? We haven’t started Sam’s elimination diet yet to try and figure out exactly what he’s allergic to, but even just switching him to a salmon based primary food has made a big difference. I’ve also been noticing how much more he trusts us now, how much more relaxed he is as a five year old. He’s always been a sensitive dog, so even though he’s been with us since he was around 10 weeks old, it took him some time to be totally comfortable — although he still thinks the washing machine is an evil monster and hides in the bathroom when it’s on. Ringo Blue’s foot is almost completely healed. He’s even been able to run around crazy in the backyard a few times even though it’s muddy right now with the snow melt. He went through a few weeks of hardcore puppy terrible twos recently, but he has been really good for the past few days so I’m hoping that bad boy Wolverine thing isn’t something that will stick.

4. Yoga. I’m teaching three classes next week, but to three different groups, so I’m going to plan one new class and then get to practice it three times.

5. TV that makes me laugh. This week it was Unbreakable Kimmy Schmidt and New Girl and Friends, which Eric and I have been binge watching since Christmas — I had forgotten there were 10 seasons of it! The Mindy Project sadly has been doing that thing all sitcoms seem to do eventually where they hit a season in which the comedy turns mean and the characters get weird not in a good way.

Bonus Joy: an email I was worried to send that got a good response, lemon, sweet potato, finally starting to adjust a little to the time change, the Open Heart Project Sangha (this month’s topic is genuine transformation and it’s so good!), Feast, finally mailing some things that had been in my “mail this” pile for far too long, permission to trust myself, laughing with my interns, getting out some of the strawberry jam I made this summer and realizing it really isn’t that bad, french toast with strawberries and jam for dinner.