It’s Monday, and even thought Daylight Savings Time is kicking my butt today, I can still think of good things to share. Here’s the list:

I just got done watching this movie (it’s available on Netlix streaming), and it’s every bit as wonderful as everyone said it was. I teared up many times just from nostalgia: Captain Kangaroo, Sesame Street, the Muppet Show, Dark Crystal, and Labyrinth. 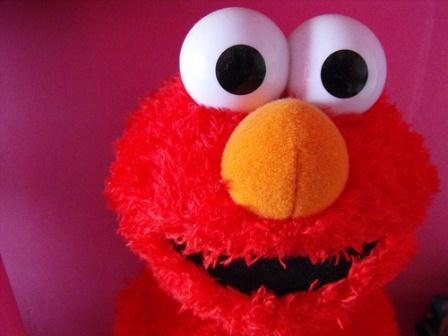 I love Kevin Clash, the puppeteer behind Elmo, and his story. He knew at nine, when he first saw Sesame Street, that he wanted to be a puppeteer. He started making his own puppets and putting on shows, but was teased by other kids for “playing with dolls.” His brother, George, said “He’d faced a lot of opposition, but he just stuck with his dream, and he went for what he truly believed in his heart.” Kevin says:

There will always be someone saying to you that you might not succeed with it, you might not make any money with that. There’s always going to be some type of obstacle in the way. All of those things will go away if you really focus on what makes you happy.

When developing the character of Elmo in 1984, after many other puppeteers abandoned him, Kevin says “I knew that Elmo should represent love.” Oh, and he does! I was already in high school when Kevin’s version of Elmo appeared, not the target audience at all, but I loved him so much, still do.

Yesterday was the two year anniversary of the day we brought Sam home from Animal House Rescue. This picture is from that first afternoon. He can’t fit in my lap anymore.

“We’re Getting Another Dog” This I Believe Essay by Jeanne.

The reason we have Sam is because we lost Obi. Two other really great dogs passed on this week, Strauss and Jane, and a few others are struggling. I reread Jeanne’s essay from time to time, because she reminds me that:

I believe that getting another dog is a physical act of pure hope and resilience. It’s a statement that I can and will bounce back from the worst of it.

Getting another dog is believing in life and the real meaning of it. I can’t think of any other decision I have made in my lifetime in the name of love with such an inevitably painful outcome.

Getting another dog is an act of unconditional optimism. It’s seeing the goodness and being grateful for all the blessings.

Knowing this simple truth makes me appreciate all I have at this moment and makes it easier to face all the inevitable grief that is part of life.

Let them lie, because I’m not sure if there’s anything cuter. 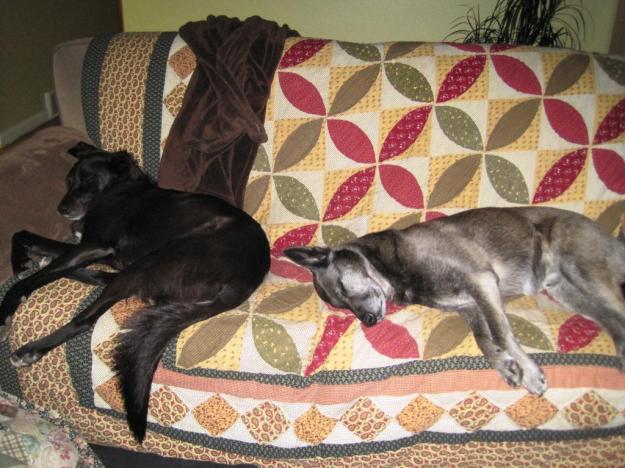 Unless it’s a sleeping baby bunny.

Dogs Have Nightmares Too

You know how sometimes my Something Good posts are mostly about amazing women? Clearly today’s list is all about dogs. Saturday night, Dexter woke himself up from a dream and started barking. He was sleeping in the living room, so I went out to check on him. He still wasn’t quite awake and when I first came around the corner, he barked at me, and then immediately realized his mistake, lowered his head and started to wag his tail. His hair was standing up all the way down his back and after I pet him for a bit, telling him everything was okay, he followed me back to the bedroom and asked if he could sleep with us, just like a little kid who’d had a nightmare. I loved it, because he hardly ever sleeps in the big bed with us anymore, and I miss cuddling to sleep with him.

My great aunt Magdeline used to make this for us. There’d be rows of dark bottles lined up in her dirt cellar, and it was so tasty. I had some yesterday at Coopersmith’s that wasn’t as good as that (how could it be?), but it reminded me how good it can be.

“Somebody That I Used to Know” by Gotye.

I love a good heartbreak song, and I’m really digging this one.

I’ve been on the giving and receiving end this week, and there’s just nothing better (other than sleeping dogs and bunnies, just to review). Kate Courageous posted on her Facebook page today “Someone left a note on my car that my bumper stickers ‘made their day.’ The fact that they left a note made MY day. #kindness.” This is how it works, you tell someone something kind, and they soften and feel the love, maybe even send some appreciation back your way, and you feel good having made them feel good, and it’s all good. We should do more of this.