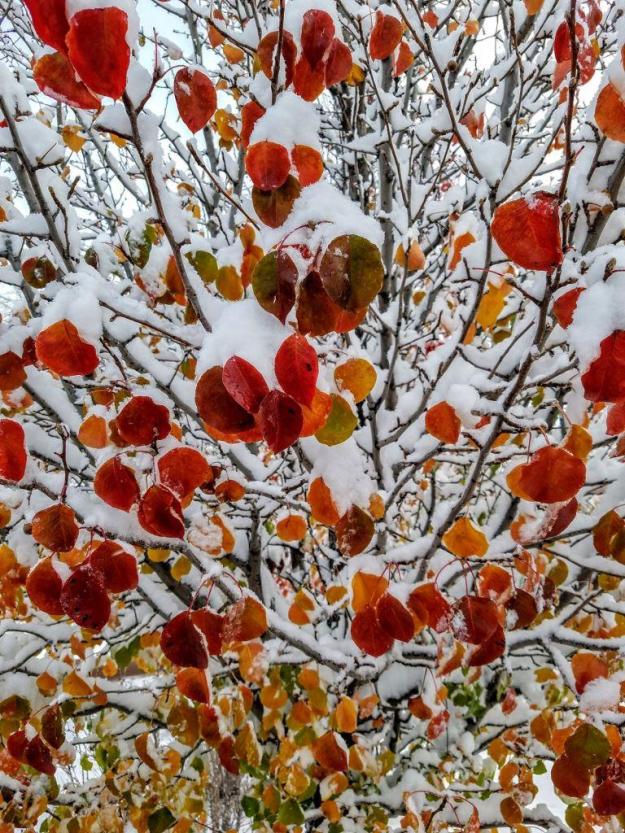 Fall and Winter in a single tree, by Eric Salahub

1. Savor is coming! Daily Practices for a more nourishing holiday from Rachel Cole, one of my favorite traditions. I shared this last week too. It starts November 20th, so there’s still time to sign up.

2. 7 Questions to Ask When You’re Feeling Stuck. “When you feel stuck, asking why is often helpful. But just asking ‘Why am I stuck?’ doesn’t always work, because feeling stuck can be more of a general sensation than a specific ailment. So here are a few other questions that might help you figure things out.”

3. Roxane Gay, Feminism and Difficult Women, an interview with one of my favorite authors.

4. It’s very clearly okay to be white. “This incident is part of a larger effort from white supremacists and white-nationalists to center their own insecurities in conversations about racial inequity and convert those who wouldn’t normally take a stance to their side of what they think is an anti-white culture war.” This happened on MY campus this week, and it’s not okay.

5. An Open Letter to Brené Brown. “This world has a whole lot of amazing changemakers who happen to be fat. I think it’s time we invite sizeism into the diversity conversation to make space for healing.”

7. Good stuff written or shared by Austin Kleon: You are allowed to change your mind and The tension between creativity and productivity.

8. Calorie counts on menus are going to be mandatory in 2018. This is why we can’t have nice things…

9. The “New” Black Friday. “Black Friday is, for many Americans, a day of stress and debt.
What if we chose to give it a better meaning?…This Black Friday, go with the new black: Spend at least part of the day making a Love List as a holiday gift for someone you love.”

10. Colin Kaepernick Is GQ’s 2017 Citizen of the Year. “He’s been vilified by millions and locked out of the NFL—all because he took a knee to protest police brutality. But Colin Kaepernick’s determined stand puts him in rare company in sports history: Muhammad Ali, Jackie Robinson—athletes who risked everything to make a difference.”

11. I am tired of being invisible to you all from Winona LaDuke.

12. Who Will Mourn Teen Vogue? on The New York Times.

14. 20 Really Good New Books You’re About To Hear Everyone Talk About Nonstop.

15. David Cork Wants To Normalize Bisexuality With His Webseries.

17. Being busy is the new status symbol.

19. Otters wag their tails like dogs when they’re happy. (video) So cute.

20. Little Boy And His Mom Are Saving Hundreds Of Shelter Dogs. (video) When he chokes up at the end talking about Sully, I lost it. Here’s another video about him and the project he and his mom work on, Project Freedom Ride.

21. Staying in With a Chronic Illness: Expectations vs Reality. (video)

23. This weed commercial is a hilarious parody of pharmaceutical advertisements. (video)

24. Stop walking your dog. Not gonna stop walking my dogs, but there are some good reminders here.

27. Ava DuVernay Talks ‘Lip Service’ of Diversity Programs: ‘Once They Do That First Year, Then What?’

28. This Man Used to Dance for Fun—Now He Dances to Help Others. (video)

29. Stephanie Beatriz’s New Movie “The Light Of The Moon” Is A Rape Recovery Story That Needs To Be Told: BUST Interview.

30. Fighting Hunger Under Trump’s Budget. (video) “‘It’s very difficult for children to concentrate on their education if they have not been properly fed.’ Trump’s budget cuts could spell disaster for places like Mississippi, which faces the worst hunger rate in the nation.” There are some who’d watch this and still feel like it’s not their responsibility to help, that hungry people have somehow made a choice and “it’s not my problem.” I watch this and think we should be embarrassed that there are so many hungry people in a culture where so many have so much more than they need.

31. The Tragic Story of Althea Garrison, the First Trans Person to Hold State Office in America.

32. Professor: ‘Toxic Masculinity Is Killing Everyone.’

33. Elisa Kreisinger/Pop Culture Pirate breaks down why there are so many mediocre male leaders & how it’s hurting women. (video)

34. Amazing Hoop Dance performance by Nakotah LaRance at the Swaia Fashion Show. Note to self: If this guy challenges you to a dance off, forfeit.

35. Holy Thank You For Not by Megan Falley. (video) A beautiful poem. Another beautiful poem? Watch Andrea Gibson Perform ‘Your Life’ in The Dreamhouse.

36. Her family hired me as a maid for 12 years but then she stole my life and made it a Disney movie. Someone on a thread about this suggested (after we heard the court case didn’t work out and Abilene Cooper hasn’t received any sort of justice), that she needs to make her own movie about what happened to her, including how Becky stole her story and made a bunch of money and fame for herself.