This blog started with my “life rehab.” After years of a toxic work environment and two significant personal losses, I looked at my life with a new clarity and realized I wasn’t happy. As I dug a little deeper into the “why?” I realized I’d been in a long term abusive relationship — with myself. As I untangled the “why?” there, I discovered self-aggression directed at my body, which manifested as disordered eating and overexercise, a self-loathing that at times turned suicidal.

I started therapy, directly focused on the disordered eating but which uncovered deeper suffering still. I worked a lot with Rachel Cole. I read a lot of books, did research, took classes and went on retreats. I stopped dieting, quit starving myself. I stopped working out with my trainer. I became a yoga teacher and meditation instructor. I did a little more therapy.

I started making choices about what to eat and how to move that were about feeling good and overall wellbeing, rather than about a number (weight or clothing size or BMI) or how it would make me look. I embodied what it meant to love myself. It’s been a lot of work, effort and energy and attention, and I’m still not all the way “there,” (whatever that means). 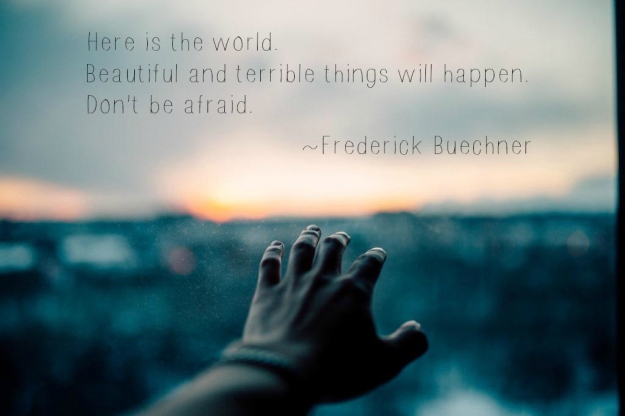 What I realized the other day is that because of the work I’ve done for myself, it’s natural for me to advocate for others who suffer in similar ways. Because of my increased awareness and sensitivity, I see things other people might miss. I understand suffering and love in a way some people won’t even allow themselves to consider. They choose instead what is easy, embodying willful ignorance — pettiness, hatefulness, bigotry.

Take this video, for example. Someone shared it on Facebook the other day, with the caption, “Inspirational ❤ .” I watched it and had a completely different reaction. I felt sick to my stomach, then I cried. The more I thought about it, the angrier I got — white hot rage.

The video was made by Edeka, the largest supermarket corporation in Germany. As I write this post, it’s had 2.6 million YouTube views, and on their Facebook page it’s been viewed 33 million times, been shared close to 450,000 times, and the reactions range from like, love, and “haha.” There are 16,000+ comments on the Facebook post, and many are in German, so I didn’t spend time reading them and can’t really tell you exactly what people were saying.

The video is blatantly fatphobic. It portrays fat people as lazy, satisfied with eating the same gruel day after day. They eat lunch at their desk as they work or while waiting for the bus, and even their pets are fat. They dress in muted dull colors and are shown restricted to the city, with its concrete and lack of nature. The clear message in this representation is that fat bodies (people!) are lazy, boring, joyless, unhappy, and essentially immobile.

At a key moment in the video, a young boy notices a bird outside the window. Seeing it fly gets him excited about the prospect of flying himself. We all know humans can’t fly unaided by the technology of a plane, or at the very least a hang glider. No matter how thin you are, a bunch of balloons or a pair of cardboard wings won’t enable you to actually fly. And yet, the video shows differently.

The boy tries everything he can think of, but always fails, clearly because he’s too fat. Then one day, he sees the bird eating berries, so changes his own diet to berries. I’m sure you can guess what happens next. It’s pure “body transformation = happiness” porn. The boy looses weight because of his new diet, and makes a pair of cardboard wings that allow him to fly just like the bird. The final scene is of him relaxing in a lovely lush meadow, “finally” happy in his new thin and therefore apparently magical body, popping a single berry in his mouth. A caption in German reads, “Eat like the person you want to become.”

The message is clear: fat = unhappy & unhealthy. And to change yourself, simply change your diet. There’s so much wrong with this that I don’t even have space in a single blog post to dismantle it completely. What I do know is “the cake is a lie,” (essentially, your promised reward is merely a fictitious motivator). There are plenty of studies, books, articles, and research that debunk this simple formula, and even more personal stories that make it clear that diet and exercise don’t automatically lead to happiness or health.

Eating good food is a choice, but more importantly YOU get to decide what “good” means. For me, good food is what appeals to me, satisfies my eyes and nose and mouth and stomach, tastes good and makes me feel good — sometimes that means I feel more energy, sometimes it means I feel more relaxed. Sometimes that means eating a kale salad, but sometimes it’s a slice of cake, and none of my choices have anything to do with my worth as a human being, because what I eat isn’t about morality. Same goes for movement — I do what brings me joy and feels good to my body. It has nothing to do with trying to chase a number or manipulate the way I look. It has nothing to do with being pleasing or acceptable or valuable to anyone but myself.

The bottom line is this: One’s choice to treat others with generosity and compassion, to be a sane and wise person in our dealings with other people, should be based in our common humanity, NOT the way our pants fit. I guarantee if you turned your effort and energy towards loving people, towards easing suffering in yourself and in the world, you wouldn’t have time for all this other nonsense.