I didn’t march yesterday. There are all kinds of reasons: my bum knee, as an introvert the thought of all those people in one place terrifies me, and I had mixed emotions about the whole thing, mostly because of what I was hearing women of color say about the participation of white women. For example, (go here to see the whole thread): 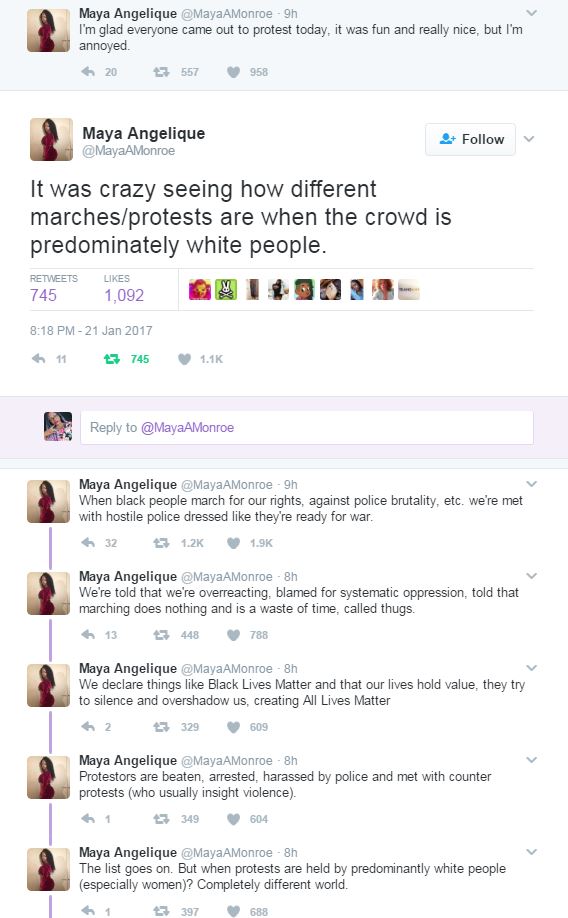 I’m still trying to figure out the right way to show up, and marching yesterday just didn’t feel like it was it for me. Although, I did spend way too much time on Facebook yesterday, looking at pictures, reading posts, watching videos, and sharing what seemed important. I’m so grateful for all of the people of color in my Facebook feed, consistently pulling me out of my privilege bubble so I can see things more clearly. I’m also grateful that so many did march, because I think that the number of humans that showed up makes a statement. And yet, I can’t help but worry now that the “fun” part is over many of those same people will go back to their lives and not continue the effort.

It wasn’t that I didn’t do anything yesterday. I signed up to support the continuing good work of the Obamas through their newly formed Obama Foundation. Then I signed up for the monthly “E-Ally Box” from Safety Pin Box, “a monthly subscription box for white ppl striving to be Black Liberation allies via support for Blk Women & completing measurable tasks.” A quote from their welcome packet nails exactly why I signed up, “Understanding and being willing to dismantle whiteness is the only real cornerstone of white ally work.” This opportunity seemed like a really good continuation of the other classes I’ve been taking, 37 Days of Activism, and Hard Conversations: An Introduction to Racism, and Healing from Toxic Whiteness.

Another reason everyone needs to keep showing up: the menu on the left is the While House website issues under Obama, the menu on the right is the change that happened only a half hour after the inauguration

And like I said on Facebook yesterday when I shared links to the two new things I’d signed up for, I was not posting (there or here) to congratulate myself or to apologize for being late, but rather in case you want to show up too. I know I’m not the only one trying to figure out how to do that. It’s clear that I have spent a lot of my adult life choosing my own comfort over justice, and I am ready to not do that anymore.

It’s important to note what has actually changed: now I’m ready. Sure, some of the fuel is Trump being elected, but more than that I’m now finally strong enough, confident enough, able to show up, willing to be wounded, able to meet the discomfort with sanity and compassion — most of the time. I was raised, not just by family but also by school and church and culture, to be nice and friendly and compliant and quiet and pleasing to look at. This was what it meant to be a “good girl,” this was how I would earn love and be successful. I’ve spent the last ten years slowly unraveling myself from that. It was really clear the damage it had done to me personally, but I’m only now realizing the bigger issue — me being a “good girl” meant I was not showing up for other people who needed me, needed me to be strong, to stand up and help them.

The other thing I’m still working out is how to be so angry, so upset, but also practice compassion and wisdom.

This poster sums it up pretty good. I contemplated it most of the morning, and then I saw this quote from Angel Kyodo Williams, “Anger is capable of pointing us back to love. It arises as a result of an offense to what we love. If we can use anger to reconnect to love, then that anger—the response that we have to injustice, pain, and suffering in the world—can be a generative force rather than a destructive one.”

I still don’t understand how to work with the bullies. I never have, even though it’s been a constant theme in my life. The other day on Facebook, I shared a link, 10 Acts of Resistance on Inauguration Day and Beyond. It’s a list that includes things like help someone, pray, create, rest, and cultivate gratitude. Another friend shared it, and her friend shared it too. Friends of the final person to share skipped past their friend’s post to find my friend’s post, a person who was a stranger to them, and started to bully everyone on the thread, saying protest on that day was childish, a sign of both emotional and mental instability. I posted the definition of an internet troll to be clear what he and his few friends who had followed him where doing — “In Internet slang, a troll is a person who sows discord on the Internet by starting arguments or upsetting people, by posting inflammatory, extraneous, or off-topic messages in an online community (such as a newsgroup, forum, chat room, or blog) with the intent of provoking readers into an emotional response or of otherwise disrupting normal, on-topic discussion, often for the troll’s amusement.” My post was met with more harassment, and my friend blocked the people from her page when it became clear they were not at all interested in an actual dialogue.

Women of color in my Facebook feed keep asking that white women “talk to your people.” The implication is that we can talk to our family and friends and cause some shift, some change. But then I think about people like this man (who is white), and other bullies and racists and such that I’ve known in my lifetime — friends, family, and otherwise — and I don’t see how. I’ve never been able to say a single thing that would change their worldview. A tweet I saw the other day expressed it so perfectly.

So there it is, kind and gentle reader. The things I am figuring out, what I’m doing, and what still confuses me. As always, I’m open to any suggestion you might have, anything you know that I don’t. May our effort ease suffering, in ourselves and in the world. May we continue to show up, not give up.