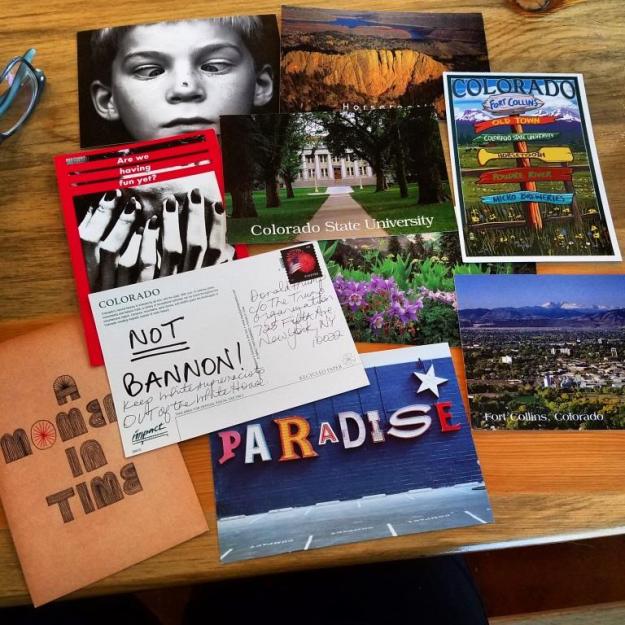 1. Truth: I sent 10 postcards to Donald Trump. It was part of a larger project where people from all over sent the same with a simple message, “Not Bannon.” I added a short message, a plea to “keep white supremacists OUT of the White House.” I don’t pretend to think there aren’t already white supremacists in the White House, or that my postcards will make any difference, even when added to all the others, but I’m willing to try it, to at the very least register my disagreement in some small way.

2. Truth: I sent an email to President Obama. I’ve heard that it’s more effective to call, but I was at work and didn’t want to be interrupted, yet wanted to say something — again, to at the very least register my disagreement in some small way. Here’s where you can submit a message: https://www.whitehouse.gov/contact My email said, (feel free to copy it or use it as a script if you call, I’m happy to share if it makes it easier for anyone else),

It has been a blessing to have you as our leader for the past eight years. I voted for you both times, with my whole heart. The first time you were sworn in, I watched live online and sobbed. I’m crying now remembering it.

Over the past eight years, you have been the voice of reason, sanity, and compassion. I know that you’ve done what you could under difficult circumstances. You did so much good, and I know you’d hoped to do so much more. With you in the White House, I believed that we all were moving in the direction of wisdom and compassion, that things would continue, with our good effort, to get better for all people and for our planet.

And now, the bad news (besides that other terrible horrible awful news we got on election day) — In these final days of your time in office, I find myself disappointed in you. As Bernie Sanders said in a recent open letter to you, “It is deeply distressing to me that the federal government is putting the profits of the oil industry ahead of the treaty and sovereign rights of Native American communities.” I don’t have to tell you all the things that are wrong with the Dakota Pipeline Project, (but just in case, here’s the short list: a white community rejected the pipeline near them because of the risk to their water supply when no such option has been given to those at Standing Rock, the way the pipeline has been permitted is not just unethical but possibly illegal — building it a little at a time to avoid the environmental studies that would be required for such a project if submitted as a whole and ignoring standing treaties about the land — and the oil transported by the pipeline is going to be sold to another country so the only purpose of the line is the profit of a select few).

What has me so distressed, so disappointed in you, is that in recent days especially, there have been clear human rights violations happening on the site. These good people who are protecting their sacred burial grounds, their land, and OUR water are being horribly abused.

I’m begging you, step in. Stop the abuse of the water protectors. Stop the pipeline. Make sure those involved in illegal actions are prosecuted and held responsible. And when that’s done, apologize to those at Standing Rock for not stepping in sooner. Please, please make this right.

3. Truth: Yesterday was Giving Tuesday. I didn’t spend any money on Black Friday or Cyber Monday, but yesterday I gave $10 to an older gentleman standing out in the cold who’d asked for “.25, .50, anything.” Then I was Christmas shopping and saw the cutest, softest stuffed kitty. Dexter would have loved it so much, and I totally wanted to buy it, even though the dogs we have now can’t have those kinds of toys, (Ringo is a murderer). For a brief second, I considered buying it for myself, but even my broken little heart knew how dumb that was. Then I saw a Giving Tuesday link for one of my favorite animal shelters, Richmond Animal League. Problem solved! If I give them $25 dollars, they don’t just give a dog a new toy, they give him new humans and a new home, and that’s so much better. Then I gave a month’s worth of meals to Rams Against Hunger, a project “aimed at eliminating food insecurity for students at Colorado State University by providing five nutritious meals a week from the CSU dining halls to students in need” because school is hard enough, life is hard enough without having to worry about being hungry too. Then I gave my first Kiva loan. I’ve wanted to give a loan through Kiva before (https://www.kiva.org/) , but every time I go to their website and look, I get so overwhelmed and leave without giving a loan. Yesterday, I tried again, and was successful. First, I filtered to “women” and changed the results to show by “amount remaining.” My goal was to be the one who completed someone’s loan. I looked a bit, and was feeling that same sense of overwhelm, “how am I ever going to choose,” and then I saw her face, and I can’t explain it, but I knew this was the woman I’d help. “Tahira is 37 years old and is from Sialkot, Pakistan. She is a hardworking mother of five young children. She is working hard to ensure a good life for them.” She wanted to buy a sewing machine and some fabric so that she could start a little business to help earn some extra money, and I helped her.

One wish: May we all continue to try, to not give up, and to do what we can with what we have where we are. 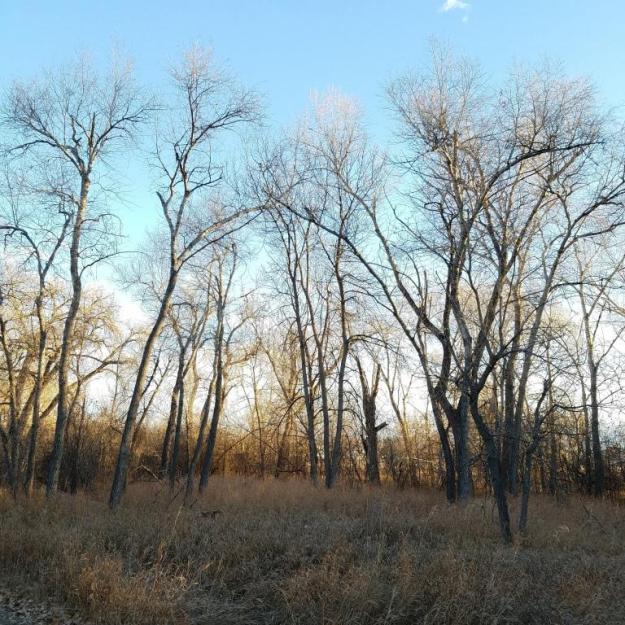 1. A twist on the mannequin challenge, DOGS! This one is my favorite, because Cattle Dogs are the best.

3. Kendrick Eagle: Message to President Obama. “A message from a young Indigenous man, Kendrick Eagle, who met President Obama in 2014 and was promised the president would have his back.” #NoDAPL In related news, Dispatch from the front lines at Standing Rock: Call your President. And if you don’t know what to say when you call, this might help, Official Press Release for Oceti Sakowin, or Cory Booker’s letter to the Department of Justice. And, At Standing Rock and Beyond, What Is to Be Done?, which asks, “What kind of machine produces violence to meet prayer, and prison in return for demanding resources to simply live? What kind of machine responds to those trying to protect their water by spraying them in subfreezing temperatures with water?” And this, Sioux Tribe Leader Responds to Army Corps Eviction Letter With Ominous Warning to US Gov’t. And this, Portraits from the Standing Rock protests. Also, did you hear that a group of military veterans are going to Standing Rock to offer support the water protectors? This post made from Zhooniya Ogitchida me cry.

“I am a 10 year, 2x war veteran. I am not a protestor, I am an Ogitchida, I am here to protect these people from you. I am a defender of the constitution. I came to see this for myself. I seen the rubber bullets, I seen the gas, I seen the attack dogs, I seen the water at freezing temperature. I seen the riot gear and the violence inflicted on so many U.S. citizens. I seen how you’ve been mistreating my people. I am the first of many warriors to come.”

4. Making America White Again from Toni Morrison. “The choices made by white men, who are prepared to abandon their humanity out of fear of black men and women, suggest the true horror of lost status.”

5. Gaslighting Is a Common Victim-Blaming Abuse Tactic – Here Are 4 Ways to Recognize It in Your Life. In related news, 7 Tactics of Emotional Abuse Used By Trump Supporters Post-Election.

7. President-elect Trump finds himself learning what the job really entails from SNL.

11. Secret Life of 4 Year Olds: Cuddles and Coleslaws. OMG, these kids are so cute.

13. 6 Quick Questions to Help You Simplify and Free Up Time for What Truly Matters.

15. The Mental Habit of Feeling Rushed & Overwhelmed from Zen Habits.

16. How one restaurant nourishes the soul.

Take your anger, your grief, your fear, your overwhelm — whatever states you find yourself cycling through — and let them be guides. Show up without knowing what you will write or say. Trust your instincts: join up with people you can learn from and move away from people who make you feel unsafe or crazy. And if the quiet of really listening for where you belong is trying to get your attention, let it.

19. Closer – The Chainsmokers ft. Halsey (Boyce Avenue ft. Sarah Hyland cover). I love this version. And if you really listen to the lyrics of this song, it’s the saddest thing ever… “We ain’t ever getting older.” *sigh*

20. Wall of Us. “He promised a wall. He will be stopped by a wall of us. Four concrete acts of resistance delivered to your inbox each week.”

21. A wish from Maya Angelou, “My wish for you is that you continue. Continue to be who and how you are, to astonish a mean world with your acts of kindness. Continue to allow humor to lighten the burden of your tender heart.”

22. Body Positivity is Political and Other Things to Know & Do.

23. Why I Left White Nationalism.

There are millions of Americans who don’t understand why anyone might worry about the effects of this election. They see it as ‘feelings’ versus their own real concerns. Those of us on the other side need to be clear that Mr. Trump’s callous disregard for people outside his demographic is intolerable, and will be destructive to the entire nation.

24. Safety Pin Box, “a monthly subscription box for white people striving to be allies in the fight for Black Liberation. Box memberships are a way to not only financially support Black femme freedom fighters, but also complete measurable tasks in the fight against white supremacy.”

25. Garbage singer Shirley Manson on beauty and social media. “There’s so much pressure on young women to be beautiful, to put a photograph up on social media and have people go, ‘Wow, you’re so beautiful.’ Unfortunately it’s such an empty pursuit, really, to be told you’re beautiful.”

26. Dogs are the best. These 9 hilarious comics remind us why. Not that I needed the reminder.