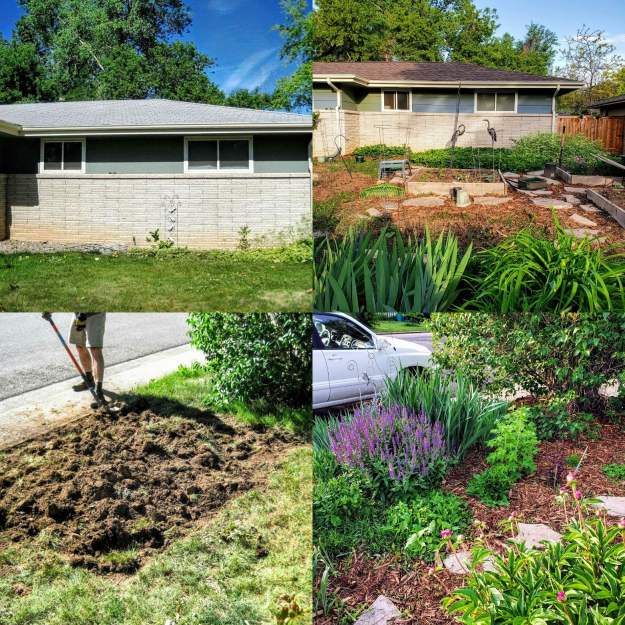 1. Truth: Real change takes time and effort. Pictures showed up in my Facebook memories from our garden eight years ago, as we were just starting, putting in the front burm and three raised beds, starting to plant. I went out this morning and took pictures of those same spots, to document the progress. Seeing the pictures side by side made me realize, again, that things take the time they take, and that is sometimes a very long time. It can go so slow it seems like you aren’t making any progress, but if you keep moving forward, even if it’s just baby steps, even if you take breaks to rest, even if you get lost for a bit, if you don’t give up you will eventually get somewhere. It might be different than what you planned or expected, but it might be even better.

2. Truth: Life is suffering. It’s uncomfortable and difficult, change is constant and impermanence is the outcome. Things won’t go how you planned and you won’t get what you want. You will get sick, injured, and eventually die, as will everyone you’ve ever known or loved. The foundation of Buddhism is four noble truths, the first of which is exactly this: life is suffering. Yoga offers a similar understanding: “One of yoga’s central teachings is that everything changes. This material world of prakṛti is impermanent and always changing (pariṇāmavāda) and we suffer when we remain attached to the way things were,” (Dr. Jarvis Chen). Most of us can consider our own experience as the proof: this is hard.

3. Truth: Cultivating the ability to stay with it is a worthy effort. To stay with it, keep at it, not give up, even when it gets hard. I was thinking about this in the context of racism this morning. As I work to be anti-racist, there was a time when I thought there would be an end to the internal personal process, that I would eventually root out all the racism in me, that I would reach the bottom of it, the end. Now I realize that as a white person during this moment in history in this culture, I will probably always be racist on some level. It’s like the bindweed in my garden — I continue to pull it out, day after day, season after season, but I most likely will never be entirely rid of it. It’s just too prolific and hardy. And yet, I will keep trying. My hope is the same with anti-racism, that if I continue to put in the effort, I will see more clearly, my actions will continue to be more skillful and effective, and I will cause less suffering, do less damage.

One wish: May we cultivate our ability to stay, to make the effort for as long as it takes even if it takes forever and even when it’s hard, doing as Andrew Boyd said, growing “strong enough to love the world, yet empty enough to sit down at the same table with its worst horrors.”