It came to me that every time I lose a dog they take a piece of my heart with them, and every new dog who comes into my life gifts me with a piece of their heart. If I live long enough all the components of my heart will be dog, and I will become as generous and loving as they are. ~ Anonymous

I am a dog person. I’ve been lucky enough to be rescued by four dogs, three adopted and one born on purpose. When I talk about my practices, I always include “dog,” along with writing and meditation and yoga. It is a sacred relationship for me, serious practice but also the sweetest joy. Dog is my guru, my teacher, my guide, my companion, my heart.

Me and Muffin, sometime in the 70’s

My first was Obi, a Rottweiler, German Shepherd, Husky mix. His name meant “heart.” He and his littermates came from a shelter in rural Colorado where they’d been dumped. I was looking for a tough guard dog, but Obi’s life strategy was to make friends with everyone, human or animal. He grew up to be big enough and did have a big bark, and if he thought someone was trying to hurt me he did guard me. He loved me with his whole heart, but he was afraid of everything.

Obi was an anxiety driven, high energy puppy who never grew out of his fear of loud noises: fireworks, gunshots, wind and thunder, fans and hair dryers. Sometimes he got so scared and shook so hard that his teeth chattered. It was difficult for him to settle down or relax, and his efforts to cope with his anxiety himself were typically destructive and loud.

Obi had separation anxiety, which is why we adopted Dexter, so Obi wouldn’t have to be alone. I always told Dexter that he was Obi’s dog. Dexter was a German Shepherd, Cattle Dog mix who’d been abandoned at another rural Colorado shelter when he was just a baby. He was underweight, but otherwise healthy.

Dexter loved Obi as desperately as Obi loved me—the first time Dexter saw Obi, a big dog who was panting, whining, and shivering in fear, Dexter ran right over to him, stood on his back legs, put his paws on Obi’s shoulder and started to kiss his face. As a guarding/herding mix, Dexter’s loyalty included his whole pack, so it worked out for all of us.

When Obi was almost eight years old, the impossible happened. We lost him to lymphoma, a canine cancer that is treatable but ultimately not curable. As I was caring for him and saying good-bye in those last months, even as my heart was breaking I knew I’d rescue another dog once Dexter, Eric and I were ready. When we finally did, we were still sad, but Dexter had started to bark again and I had actually laughed a few times. Even though what we really wanted was our Obi back, we found another puppy to bring home.

Sam was a black eleven week old Lab, Border Collie, German Shepherd mix who was named Jerry when we first met him. (We’ve since discovered he’s actually half Border Collie and half Chesapeake Bay Retriever). He and his brother had been found roaming a small, rural town in Wyoming. Neither one had a collar and no one had claimed them. The day we went to meet Sam for the first time, I told Dexter if he didn’t like him immediately, we’d keep looking, but as soon as they saw each other, they touched noses and both their tails wagged. Sam grew up to be a big, goofy dog, but incredibly smart as well, super sensitive and sweet. He helped heal our broken hearts.

We had no idea then that he would do so twice, that Sam would become our grief counselor again so soon, but when he was only 2.5 years old, Dexter had an episode of reverse sneezing and a bloody nose while we were on vacation on the Oregon Coast. We thought he simply got something in his nose, weren’t worried about it, even waited until we got back to Colorado to take him to the vet. And then the impossible happened, again. After various tests and one surgery to rule out anything else, Dexter was diagnosed with a fatal nasal tumor. The prognosis was two weeks to two months to live, and there was nothing we could do about it.

The truth is I thought Obi’s cancer was a fluke. He was a mixed breed dog, young and otherwise healthy when he was diagnosed, not the kind of dog that typically gets an incurable cancer. But he did, and I thought that was it, our one unlucky dog. And then it happened again, only a few years later. 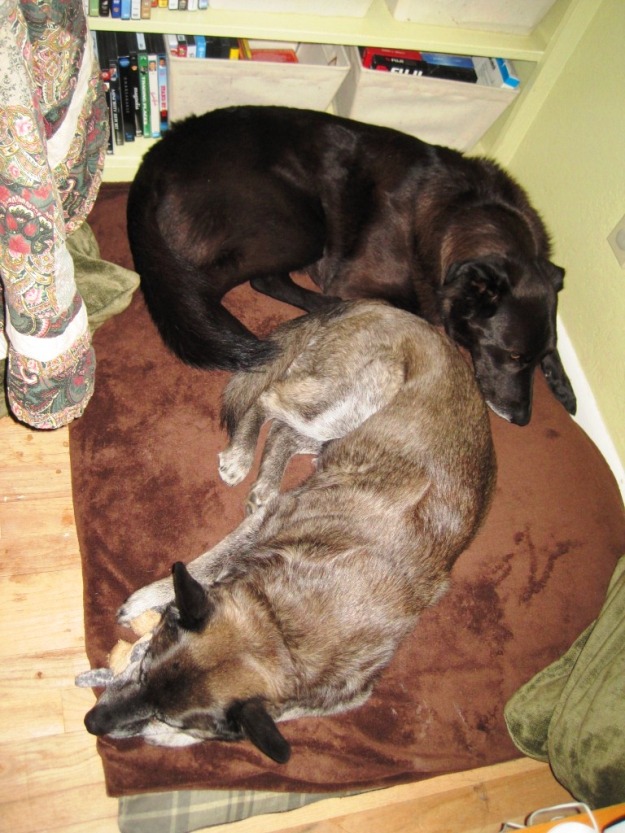 The last picture of Sam and Dexter together

And still, we were lucky. Dexter lived happily for almost another year past his initial diagnosis. Sweet Dexter died June 27, 2013. It was as easy a death as we could give him, even though it wasn’t at all easy for us. We missed him so much, especially how full of joy he always was, and were traumatized losing another dog so soon, in similarly awful fashion. At the time, Sam was suffering from a mysterious illness that no one, not even specialists could explain, which meant we couldn’t treat it either. It got so bad, we thought we were going to lose him too.

We found ourselves at a crossroads. Do we get another dog? Or do we care for Sam as best we can and not have anymore? Two had always felt like the right number for us, but we were feeling so tender, so upset and afraid and confused that we thought maybe we should just quit, give up. No more dogs, ever.

After Dexter was gone, Sam would take Little D, Dexter’s favorite toy, into his crate

At the very least, we decided to wait. We were hoping with time that we’d stop feeling like we were just waiting for the next bad thing to happen, that we’d be ready in invite another dog in, even knowing that eventually he would break our hearts. As we were waiting, I posted a status update on Facebook, asking the Universe to send us the right dog, if we were meant to have another.

The Universe got on it almost immediately. Just a few hours after making the post, my brilliant dog friend sent me a message introducing me to a local Cattle Dog person who had a lot of rescue connections, suggesting we keep in touch in case she knew of any available dogs. This new person immediately responded saying she didn’t know how I felt about a dog born on purpose but she was going to visit a litter of puppies that weekend, and maybe I should connect with their person. I did, and looking at puppy pictures, talking with their person, I knew.

It was the same feeling I had when I saw Dexter listed on Lifeline Puppy Rescue’s website. All it said was “11 week old male, German Shepherd mix,” didn’t even have a picture, but I told Eric he was our dog. He said “we’ll see when we get there,” but I knew. Same thing with Sam. We were planning to go to Lifeline that weekend, but I was home sick midweek, looking on Craigslist and saw a post about Sam and his brother, two siblings rescued through Animal House Rescue. I sent the link to Eric and he said it wouldn’t hurt to email the foster mom. As soon as she responded, I knew.

Same thing this time. The new friend who went to visit the pups said they were amazing, told me about one boy in particular. When we went to visit, it was the same boy that came over to me and sat at my feet. As soon as I picked him up, I knew. However their person still wasn’t sure who was going home with who, so we had to wait to know for certain, but I told Eric, “Boy #4 is ours, I just know it.”

This is me holding Ringo Blue for the first time. Do you see how he’s looking at me? I think maybe he knew too. It was a different way for a dog to come into my life, a difficult choice after having rescued three. But it’s so clear that the way this happened is exactly how he was supposed to come to us.

It wasn’t all rainbows and unicorns though. Ringo was a lot of work, I had just started yoga teacher training, Eric and I both worked fulltime, and Sam was still sick. Eric and I had a strange form of post-traumatic stress disorder after so much time spent caring for sick dogs, losing two of them. And yet, it was exactly as it should be.

We finally figured out what was wrong with Sam, and it was something so simple, easy to treat, and yet it felt like a miracle. I can’t even describe the depth of joy I feel when I see him playing in the backyard with Ringo, a happy young healthy dog enjoying his life. And now that Ringo has grown up a little more, he reminds me so much of Dexter, is exactly what I requested from the Universe, “joyful, playful, and a cuddler.” 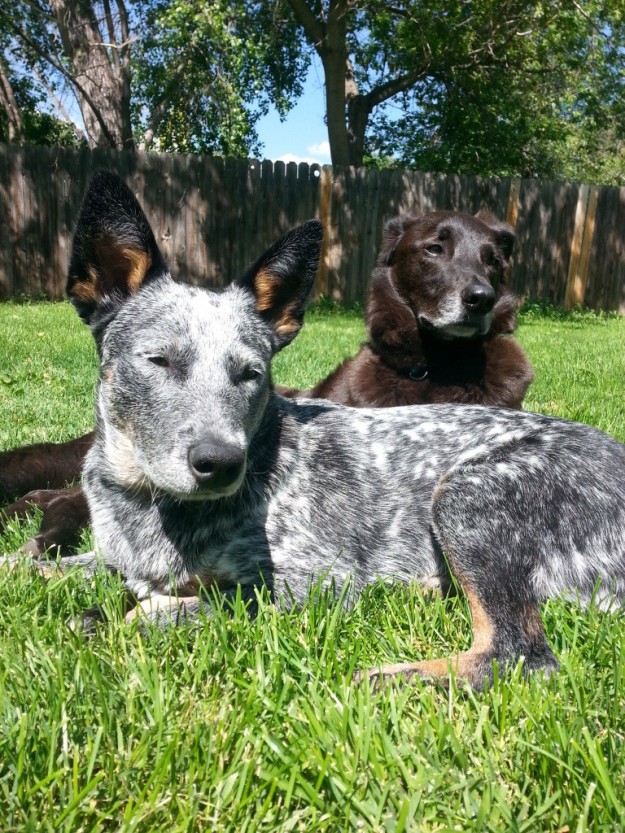 I will never stop missing Obi and Dexter. I wish I still had all four: Obi, Dexter, Sam, and Ringo, but I’m grateful for all the love and life they have brought to me, even when I had to let go.